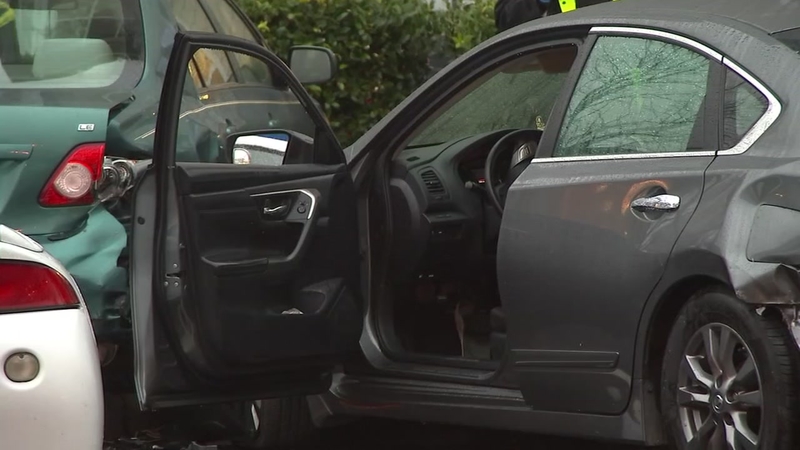 DURHAM, N.C. (WTVD) -- A death investigation is underway in Durham County after police found a body inside a crashed vehicle Thursday morning.

Durham Police Department said officers received a call before 4 a.m. about a car hitting several parked cars at Southern Oaks at Davis Park by Cortland, an apartment complex at the intersection of Hopson Road and Davis Drive, which has a Morrisville address but is located in Durham County.

Officers arrived at the scene and learned that the driver of the car was dead.

"I live alone and was leaving for the office. That's when I saw this," said Pranay Rangan, who lives at the apartment complex. "Looks mysterious. I don't think there's enough space for the car to climb up somehow - and somehow - it obviously looks mysterious."

Investigators said they do not believe the crash killed the driver, but they're not exactly sure yet how the driver died.

Several cars damaged in the parking lot of Southern Oaks Apartment Complex. @DurhamPoliceNC are conducting a death investigation. They say the man that crashed into these cars did not die from injuries caused by the wreck. I’ll have the latest at noon on @ABC11_WTVD. pic.twitter.com/ZF0SzO6wOh

"You're not supposed to drive at that speed in this area," Rangan said. "The maximum you can manage is 25. And it doesn't look like an accident happening at that speed."

Officials have not said whether the man was a resident of the complex.

Aneukoon Goel, another resident, said, "This is definitely scary. We are hearing here for the first time."

"I don't know if the car hit some other cars, but somebody died," Kris Page said. "I thought about moving if somebody kills somebody over here because they said it was going to be an investigation. They say when we moved here that we got some cameras. But I have never seen them."

Mary Nevarie Marsh, a spokesperson, told ABC11 that Cortland became owners and managers of this property just two weeks ago. She could not confirm whether the dead man was a resident because of tenant privacy rights.

Marsh added that she was sad that this happened to someone in their community and said she was grateful to the police and paramedics who responded.