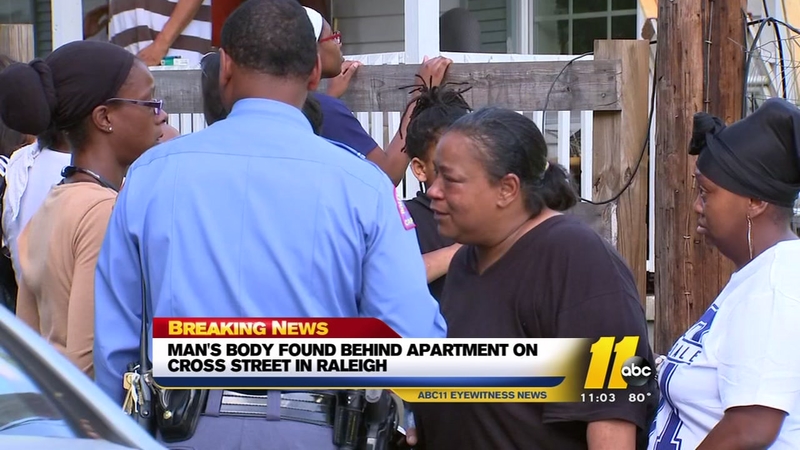 RALEIGH (WTVD) -- Raleigh police are conducting a death investigation after a man was found dead in the 1600 block of Cross Street on Thursday.

Officers were dispatched to the southeast Raleigh neighborhood around 5:45 p.m.

A crowd of neighbors and onlookers gathered just on the other side of police tape blocking off the crime scene.

Angela Anderson told ABC11 it was her son, LaQuan Anderson, 23, whose body was found lying in a yard behind a brick apartment building.


"I'm going to see him before they take my son away from here, I promise you that," Anderson yelled in frustration as she motioned across the street toward police.

"Wondering what's happening to my son?" she said. "Wondering why would y'all shoot him down like that? Whoever it was. But there's always a price to pay for someone that did a terrible thing like whoever did this."

Woman says her son's body was found behind this brick house on Cross St. in Raleigh. #abc11 pic.twitter.com/1Jl09vA2yr

She said she hadn't seen her son for the last two days after an incident landed him at WakeMed. When she called the hospital, they'd already released him. She was about to report LaQuan missing Thursday when her phone rang.

"My nephew called me and said 'Aunt Angie, Quan is dead.'"

Courtesy of the Anderson family

Community advocate Diana Powell with Justice Served NC joined the crowd that continued to grow into the evening. She noted how people were frustrated with the lack of information forthcoming from detectives who were investigating.

"Here we are again dealing with a situation that's within our southeast Raleigh community," she said. "Here you have a mother, she don't understand the process. So we need to educate ourselves when we have tragedies like this. What is expected? Who is the leading officer, detective?"

She worked to encourage patience and calm as Anderson sent a message to those behind the violence she said stripped away her son, a father of two.

"I just want y'all to think about what y'all did," she said. "It wasn't nothing good and nothing good is going to come out of it. You will reap what you sow."

Raleigh police have not yet confirmed the identity of the man whose body was found or how he died.

.@raleighpolice block opposite side of Fisher St., crowd now standing in yard, looking on. #abc11 pic.twitter.com/PkLBcAeOUf

Detectives were seen going door to door, talking with people who live in the area.

Anyone with information that might assist that investigation is asked to call Raleigh CrimeStoppers at (919) 834-HELP or visit raleighcrimestoppers.org for text and email reporting options. CrimeStoppers pays cash rewards for anonymous tips that help solve cases.