Wakefield mom on 'massacre threat:' 'We live in a country now where mass shootings are every day for us ... I don't really feel like that's overreacting' 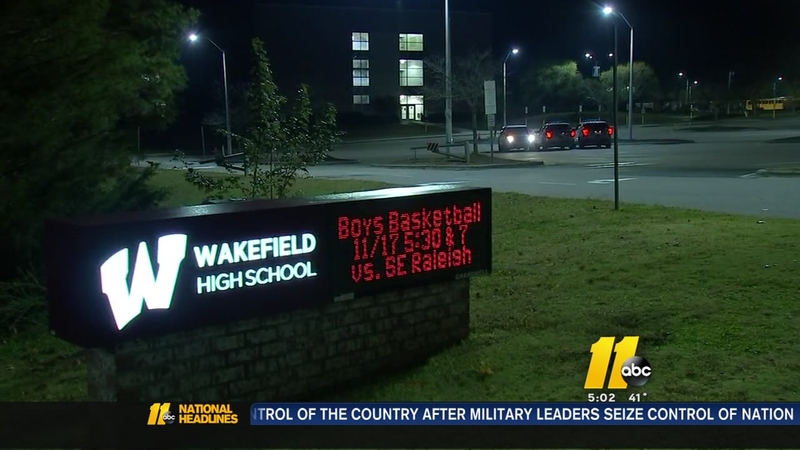 RALEIGH (WTVD) -- A social media threat of a "massacre" at Wakefield High School had many parents keep their children home from school on Thursday.

The threat which said, "The Wakefield massacre is coming don't downplay this as a joke Nov 16 during breakfast. I'm going to make an example," began making the rounds of social media Wednesday afternoon.

After the school's principal Malik Bazzell caught wind of it, he quickly jumped into action, notifying authorities and parents.

"I want to assure you that our first concern is the safety and welfare of our students," Bazzell said in a note to parents. "Threats to our school are taken seriously and we will take every measure to ensure student safety. We investigate each threat fully and pursue threats with criminal prosecution. If your child has any information about the student who is responsible for this social media post, please contact school administration or Raleigh Police Department immediately."

While some parents thought the threat was a hoax, others didn't agree and kept their kids home just to be safe.

"I don't really know that you can take commentary, or any kind of news report like that, as a hoax in today's day and age, so I said there's no harm in calling Raleigh PD and Wake Forest PD and figuring out what the status is and if this is something we need to be concerned about," said Wake Forst resident Meghan Rauen. "We live in a country now where mass shootings are every day for us. They happen in movie theaters and churches and schools, so anytime there's a mention of a threat, I don't really feel like that's overreacting."

After speaking with police, Rauen and her husband decided to keep their children home from school - especially after losing a child to an illness, they want to keep their young ones safe.
And students noticed the lack of their peers in hallways and classrooms.

"There's honestly not that many people there," one student said. "It's just kind of lonely. I've had five people in one of my classes and 10 people in the other one; there's not much going on. A lot of kids left. No one wants to get hurt today."

But the student also said he didn't believe the rumor was true.

"That's pretty messed up, but I do think it was just a rumor. I don't think they ever intended to actually act upon it ... It's bad to spread rumors and stuff, it gets in the way of things, but at the end of the day, I'm just glad no one's gotten hurt so far."

School officials plan to have increased police presence on campus until the threat can be investigated further.

--------------
ABC11 has decided to slowly reduce the number of stories on the website that have a comments section. We believe very strongly that our audience should have an opportunity to discuss and debate events in our world, however, we have not been able to moderate the comments as well as we would like. Instead of hosting a platform that could allow a few loud and ugly voices to dominate a conversation, we want to encourage everyone to join us on our social media platforms and speak out there. Facebook: facebook.com/ABC11 Twitter: twitter.com/ABC11_WTVD
Report a correction or typo
Related topics:
raleighschool threatviolencewake county newswake county schools
Copyright © 2021 WTVD-TV. All Rights Reserved.
TOP STORIES
LATEST: NC reports more than 3,000 new COVID-19 cases
1st case of omicron COVID variant identified in US
What we know about the Michigan school shooting victims
Parents sound off on Wake County Schools reassignment plan
4th student dies in MI school shooting, alleged gunman ID'd
Toys "R" Us is back! New store to open in New Jersey
Show More
Alec Baldwin speaks out on 'Rust' shooting in exclusive ABC interview
Wife of famed music exec is killed in Beverly Hills home invasion
'Home Alone' house listed on Airbnb for 1-night stay
Sec. Mandy Cohen, who led state's COVID-19 response, to step down
Fayetteville teen entrepreneurs embody spirit of giving back
More TOP STORIES News