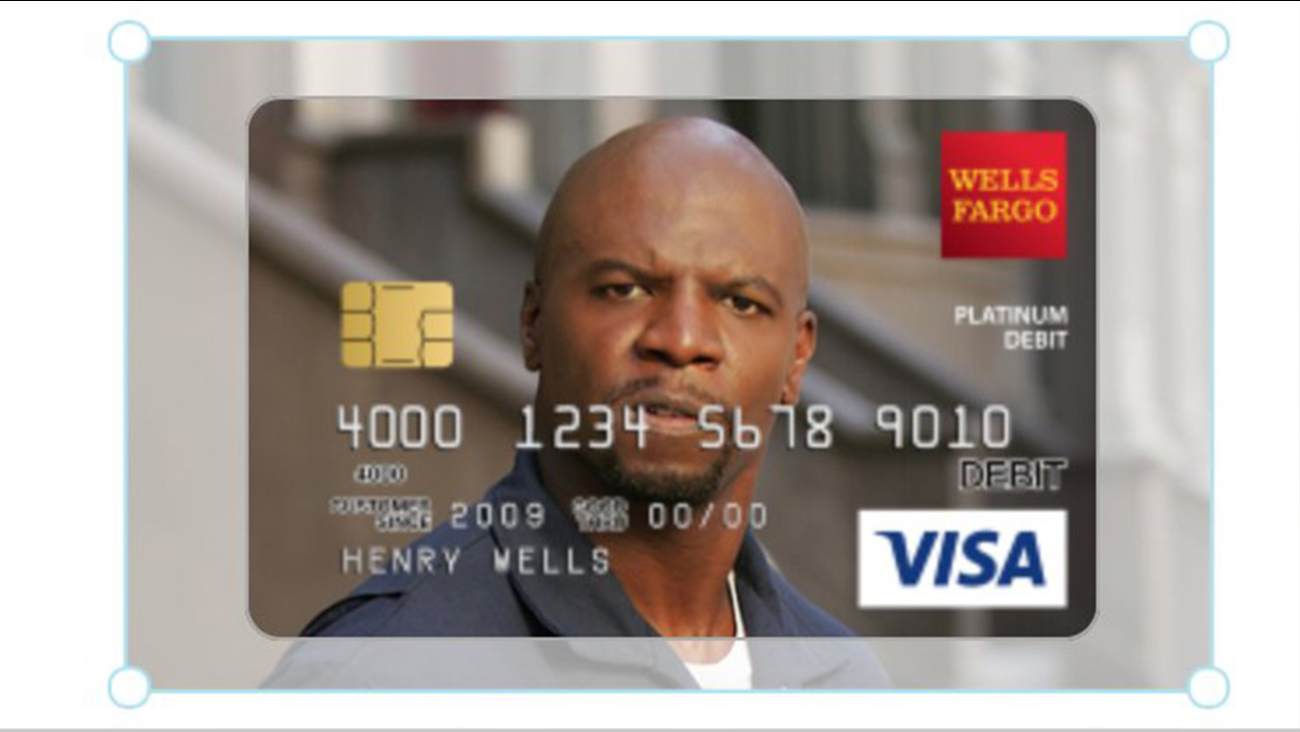 A California woman is hoping Terry Crews will help her think twice about whipping out her wallet (Credit: Darrel Kennedy/Twitter)

LOS ANGELES, California (WTVD) -- Sometimes we all need a little encouragement to watch our spending, and now one California woman will be saving her pennies thanks to Terry Crews - well, just his face ...

We all know that struggle when we look at our bank accounts, contemplate a purchase, and then do it anyway. We can't help it, we're only human!

But we all know that look of disapproval, and no one does it better than actor Terry Crews!

Los Angeles resident Darrel Kennedy thought if she saw Crews - who played a very frugal father on Everybody Hates Chris - on her debit card, it would help her spend less.

So, she put a request into Wells Fargo.

Kennedy told ABC11 the design started off as a joke between friends. She said she expected the bank to approve the card and send it her way.

"The compulsion to save money was just the icing on the cake since I know my stress shopping may need a little bit more than the picture on my credit card to make me evaluate what I'm about to buy," she told ABC11.

However, she claims Wells Fargo rejected her claim, saying she needed Crews' approval.

So, she quickly took to Twitter, begging for retweets.

"They rejected my request because they said i needed written approval from @terrycrews Can y'all RT or tag him so a girl can save some."

They rejected my request because they said i needed written approval from @terrycrews😪 Can y'all RT or tag him so a girl can save some 💸💸💸 https://t.co/QdTUIXxQX7

And she was in luck! Crews saw the requested and tweeted back, "I approve. Signed, Terry Crews."

"Y'all I'm dead, Wells Fargo about to be so shook," she replied.

But that wasn't all, not only had the bank approved Kennedy's request, they also expedited the order.

UPDATE: They’ve expedited the case and are sending it to @WellsFargo HQ to get it approved. Should have it in my hands in the next two weeks pic.twitter.com/JlggkVPsof

Kennedy told ABC11 she still hasn't received the card yet and feels that Wells Fargo is making the process harder than it has to be.

"Wells Fargo has been really slacking on verifying and approving the image so that I can resubmit it," she said. "I've had to call them to remind them of this twice now, and I plan to call again today. I still have hope that I will receive the card before the New Year."

Maybe Crews will have to step in and get the ball rolling!

But Kennedy said she's just glad Crews is playing along.

"I'm so glad and honored that he approved the image," she said. "It's proof that he has a great spirit and even better sense of humor. I'm even more honored to be the only person, outside of Terry Crews himself, to be able to get this coveted credit card."

-----------------------------------------
ABC11 has decided to slowly reduce the number of stories on the website that have a comments section. We believe very strongly that our audience should have an opportunity to discuss and debate events in our world, however, we have not been able to moderate the comments as well as we would like. Instead of hosting a platform that could allow a few loud and ugly voices to dominate a conversation, we want to encourage everyone to join us on our social media platforms and speak out there. Facebook: facebook.com/ABC11 Twitter: twitter.com/ABC11_WTVD
Report a correction or typo
Related topics:
personal financecaliforniacelebritymoneybuzzworthywells fargotrendingshopping
Copyright © 2022 WTVD-TV. All Rights Reserved.
TOP STORIES
Troubleshooter helps Cary woman get relief over return policy
I-40 west reopens in Johnston County after 6 car crash
Durham mother who founded anti-gun violence group loses second son
Victim found dead with gunshot wound in Durham crash identified
Former Uvalde school teacher grieves for her mentor, students killed
RDU expects more traffic for Memorial Day weekend
Uvalde mass shooting spurs new debate over guns and mental illness
Show More
Wake County homes left damaged after Friday's severe weather
1 in 6 NC counties have more gun dealers than mental health providers
Uvalde school police chief faulted in shooting response
Tornado warnings expire, severe thunderstorm watch remains in effect
Saturday photo exhibition celebrates NC Central baseball team
More TOP STORIES News