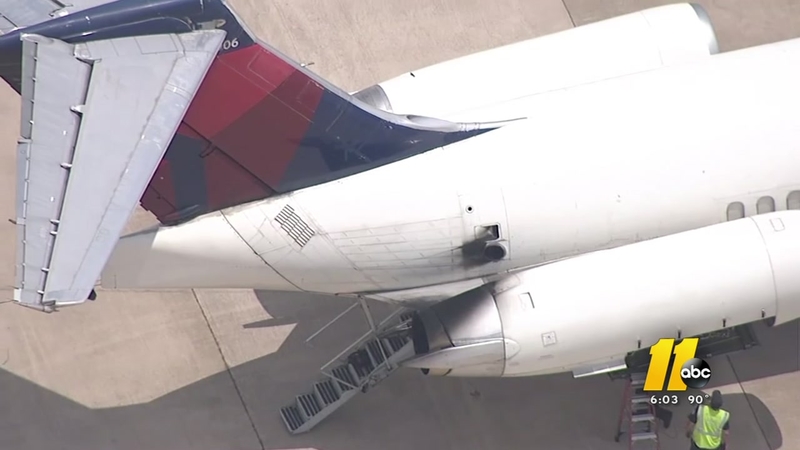 RALEIGH, N.C. (WTVD) -- Terrifying video shows problems with a plane's engine as it prepared to make an emergency landing at Raleigh-Durham International Airport on Monday.

Some passengers on Delta flight 1425 took to social media Tuesday to express frustration about how the incident was represented by the company.

"We heard and felt everything," John Leonard, who was on the flight, told ABC11.

He said he was sitting at the back of the plane, which was headed from Atlanta to Baltimore when he heard a loud boom.

"It was extremely terrifying, to be honest," he said. "Once it went, you had no doubt that it was major trouble and then seconds later smoke started filling the cabin in the back. You could smell it. It smelled like burning metal and the cabin started to vibrate."

Another passenger said he started texting his family, telling them "I love you." "I just pulled out my phone. I know I didn't have service but I just texted my mom 'I love you' and I texted my dad 'I love you' too," said Tyler Kreuger.

Other video making rounds on social media showed flames shooting from the engine.

One social media user sent a tweet to the airline Tuesday that said: "Dear @delta since you guys are not releasing what happened to our flight yesterday, flight 1425 Atlanta to Baltimore which made an emergency landing in Raleigh, maybe this video will help the investigation. A piece of the plane flew into the engine and caused it to fail."

Terrifying video shows problems with a plane's engine as it prepared to make an emergency landing at Raleigh-Durham International Airport Monday.

A Delta spokesperson sent a statement to ABC11 on Monday, saying they diverted the plane "out of an abundance of caution after receiving an indication of a possible issue with one of the aircraft's engines." The spokesperson added that the flight landed without incident.

Leonard told ABC11 that he felt the company tried to sweep the problem under the rug.

"No... we had a serious problem," he said. "Don't get me wrong, I will give all the credit to the pilots and the flight attendants for doing their job because they did it very, very well."

Still, he said, it was a frightening experience.

Delta issued a new statement Tuesday: The flight crew of Delta flight 1425 from Atlanta to Baltimore elected to divert to Raleigh, N.C. after receiving an indication of an issue with one of the aircraft's engines. The flight landed without incident and customers were reaccommodated on an alternate aircraft. We apologize to our customers for the inconvenience this diversion may have caused."