Delta flight evacuated at RDU after bomb threat made on Twitter 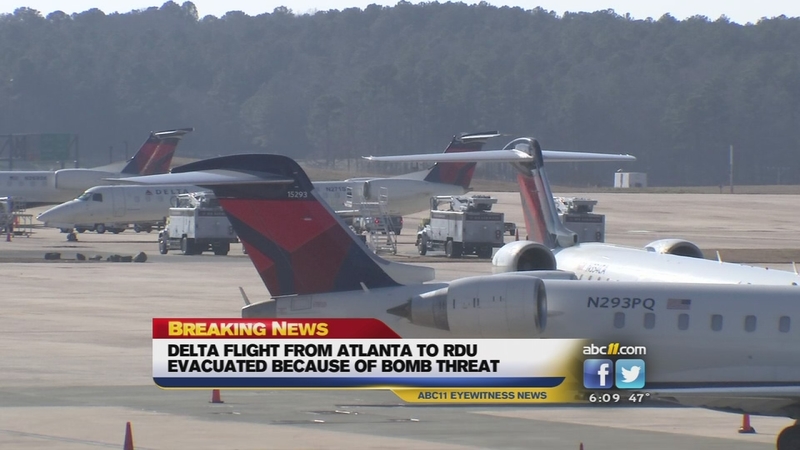 RALEIGH DURHAM INTERNATIONAL AIRPORT (WTVD) -- Airport officials say a Delta flight from Atlanta to Raleigh-Durham International Airport was evacuated after landing Saturday afternoon due to a bomb threat made on a social media site.

Law enforcement swarmed the Delta plane after it landed at RDU. An airport official says they received a threat on Twitter that there was possibly a bomb on board the plane.

Airport spokesperson Mindy Hamlin said RDU officials became aware of the message around 12:30 p.m. The FBI was called in immediately.

Officials evacuated passengers as part of the investigation, while law enforcement and dogs patrolled the scene.

"We had to single file go past a dog, they sniffed us," said passenger Chris Hart.

Passengers were detained for about three hours during the scare. Security searched everyone who was on the flight from Atlanta.

As this was happening, people were anxiously waiting in the concourse to pick up their loved ones.

"I just didn't know what to think," said Raleigh resident Joanne Moore. "[I was] afraid to stay, afraid to go."

Hamlin said the airport was given the all clear just after 3 p.m. on Saturday. Passengers were released and allowed to retrieve their baggage.

"It was crazy," said passenger David Moore. "We went into the plane one at a time to get your stuff off."

Although the airport has been given the all clear, the FBI continues to investigate.

An FBI spokesperson said a "variety of steps were taken out of an abundance of precaution."

Specifics regarding the investigation moving forward cannot be released, the spokesperson said, because of a Department of Justice policy.