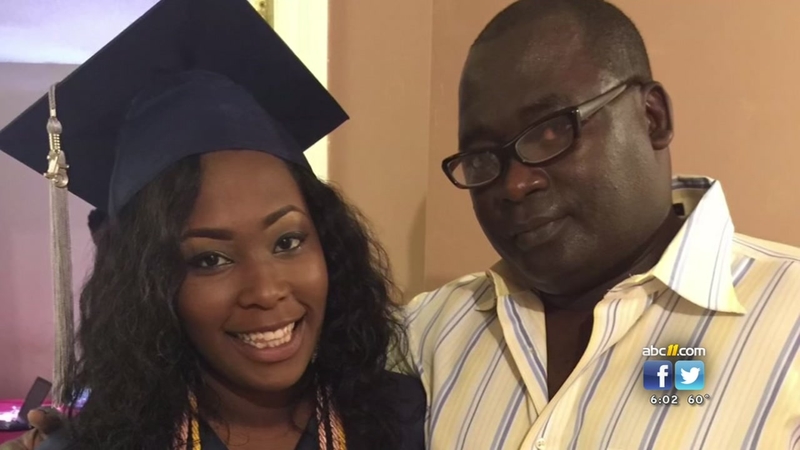 Raleigh father set to be deported back to Gambia

RALEIGH, N.C. (WTVD) -- Fatima Sowe of Raleigh is fighting for her father, Abdoulie. She says her dad is the main provider for the family, but now his life hangs in the balance if he's deported back to Gambia, an African country he fled from 25 years ago.

"We've achieved so much and it's because of him," Fatima Sowe said. "Our life would be so different without him."

The 53-year-old taxi driver is living in a detention center in Georgia until he is flown back to Gambia.

Fatima said her father is in poor health, suffering from renal disease, and hypertension. He also takes medications and undergoes dialysis for a donated kidney.

Fatima said she believes deporting her father to a country unable and unequipped to care for him is a death sentence.

"If ICE goes through this and he gets deported, he is not going to survive," Fatima said.

Year to date, approximately 11,539 undocumented immigrants have been arrested by ICE across the Carolinas and Georgia. According to ICE, 60 percent of the detainees are convicted felons.

Sowe is not a felon. But ICE said he has been on their radar for 17 years.

In a statement, ICE said:

"Mr. Abdoulie was ordered to be removed from the U.S. by a federal immigration judge in February 2001; however, ICE was unable to obtain documentation from the Gambian government necessary to conduct his removal until July. Mr. Abdoulie is presently in ICE custody pending arrangements to remove him to his country of citizenship in accordance with federal law, agency policy and the order of the courts."

The family is fighting with appeals that have all been denied.

"Everything that we're doing is failing," Fatima said.

The family has an online petition they hope people will sign, so they can give it to Congressman David Price and Sen. Thom Tillis.

"Although the Congressman has not received a request for assistance from Mr. Sowe or his family, this case appears to be representative of the misguided immigration enforcement actions occurring under the Trump Administration. Instead of wasting resources arresting and deporting upstanding members of our community, ICE should be focused on finding and removing those who pose a threat to public safety."