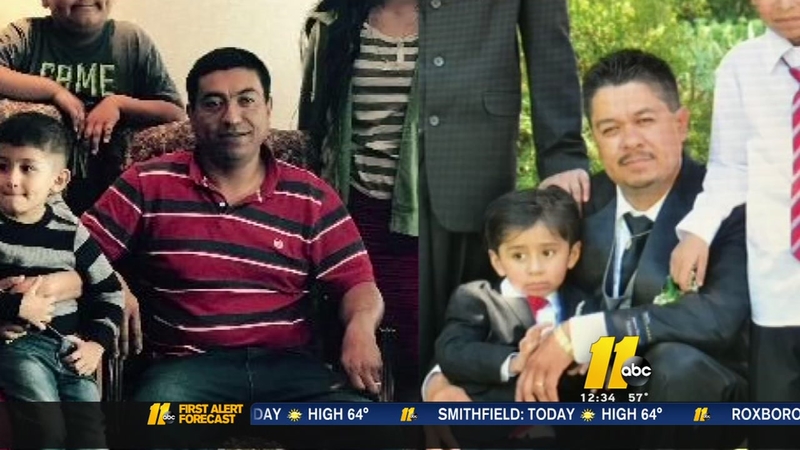 RALEIGH (WTVD) -- The families of brothers Dario and Jose Delgado protested outside the North Carolina Republican Party headquarters in Raleigh on Monday, asking for assistance to keep the Delgados from being deported back to Mexico.

"We heard yesterday they are going to be deported today," said Susan Olvera, of Alerta Migratoria NC. "This is imminent deportation. We see this as an emergency."

A U.S. Immigration and Customs Enforcement (ICE) spokesman said he can't discuss future operations but confirmed the brothers are still in custody in New Mexico.

He said their case has been extensively litigated and that they have no legal basis to remain in the country.

"Yes, he might have come illegally but he does not have a criminal record," said the daughter of Dario Delgado, Yhairi Delgado-Garcia. "He is not a threat to this society. I don't get why they would want to deport him."

Family members said the brothers have been living in the country illegally for about 20 years. Their children are all U.S. citizens and live in the Triangle.

"I don't know if we'll be able to financially be stable without him and we need him a lot," said Stephanie Delgado-Garcia, daughter of Jose Delgado.

The children also said their fathers' absence has taken an emotional toll on them.

"I'm worried and sad because I don't get to see my dad," said Jennifer Delgado-Garcia, daughter of Dario Delgado.

"The reason we are here is to call awareness to our Republicans in North Carolina to let them know how fiscally irresponsible deportation is," Olvera said.

"While it's not our place to evaluate this case specifically, the North Carolina Republican Party believes immigrants have undeniably made great contributions to our state and nation, but any national immigration policy must put the interests of our existing citizens first. To start, our border must be secured and illegal immigration must be stopped. Then, and only then, can we begin reforming our system in a way that lets new immigrants experience the American Dream while also benefiting the American economy."
Report a correction or typo
Related topics:
raleighu.s. & worlddeportationiceraleigh news
Copyright © 2022 WTVD-TV. All Rights Reserved.
TOP STORIES
LIVE : Snow projections increase slightly as storm nears
Roads mostly clear midday Friday, but snow is coming
LATEST: NC asks FEMA for help as COVID hospitalizations rise
US confirmed 1st COVID case 2 years ago today
Louie Anderson, Emmy-winning comedian, dies at 68
How to drive on snow, ice and get out of a skid
Raeford man killed in Fayetteville motorcyclist crash
Show More
Many COVID-19 vaccine side effects caused by placebo effect: Study
'So much deceit': Brother of Lori Vallow speaks out on family divide
Meat Loaf, 'Bat Out of Hell' rock superstar, dies at 74
'Wheel of Fortune' contestant gets her Audi after bonus round pause
SPONSORED: Big Weather's Big Recipe: Caramel Puffcorn
More TOP STORIES News