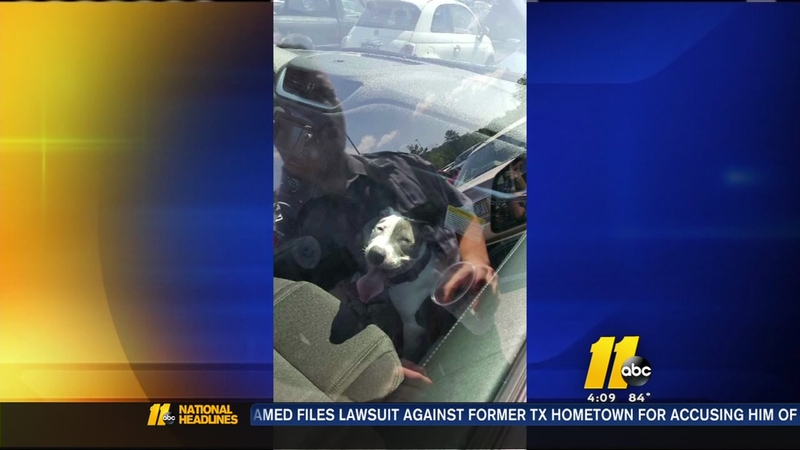 DURHAM (WTVD) -- An animal advocate said she's unhappy with how a Durham Animal Control Officer handled a young dog being left in a hot car Saturday afternoon at The Streets of Southpoint Mall. She said the officer let the dog remain inside the car for more than two hours while the owners were away.

On Monday evening, the Durham County Sheriff's Office took action, announcing a change in policy in reviewing calls of animals left in vehicles. Officers will no longer have to wait for animals to show signs of distress. Instead, officers will have more discretion as to whether to intervene for the safety of the animal as well as determining should the pet be returned or not to the owners.

"The Durham County Sheriff's Office appreciates and listens to feedback from concerned citizens. As we mentioned in our previous statement, the agency routinely reviews its response to emergency calls to assess whether there's a need for policy revision.

Effective immediately, the deputies responding to calls for animals left in unattended vehicles will continue to assess whether the pet is in distress and make every attempt to locate the pet's owner in accordance with North Carolina law. However, Durham County deputies are no longer required to wait for visible signs of distress. Under the revised policy, deputies will document the interior and exterior temperatures of a vehicle at least twice. The deputy will use his or her discretion in determining whether the animal should be removed from the vehicle. If the animal is removed, the deputy will decide whether to return the pet to its owner or pursue criminal charges after taking the animal to the local shelter."

The advocate, Jennifer Miller, posted pictures on Facebook of the incident that happened around 2 p.m. The officer can be seen looking in the car. Miller said he stuck a probe in the car through a partially open window when he first arrived. It showed the temperature was 117 degrees.

Miller, who is from Danville, Virginia, said the dog was a 6-month-old pit bull. She said she knows the signs and symptoms of heat stroke because she serves on the board of a wildlife rehab center and volunteers with Humane Society.

"He (the dog) was panting. His gums had actually already started to turn white," she recalled. "It looked like he was kind of foaming at the mouth, that really thick saliva. And he was unsteady."

According to Miller, the animal control officer mostly sat in his air conditioned van except when he went and spoke to Miller and her friend when they dropped ice cubes through the window for the dog.

The owners of the car with Maryland plates showed up about 4 p.m. They weren't charged and were told to take the dog to a vet to be checked out.

Officers standing outside the car with a dog inside

A spokesperson for Durham Animal Control said the dog did not appear to be in distress and that the officer followed the law.

Miller said she and an attorney friend looked up the law and disagree.

"It is very clear that they could have charged this person. They did not have to wait two hours to get the dog out," Miller told ABC11. "But the, you know, the officers were not listening. They were very rude and belligerent. And it was very sad the dog suffered for two hours at least."

Miller said she wants to make it clear she's not complaining about mall security and that she feels the mall did everything in its power to help the animal. The general manager even came by and thanked her for her efforts.