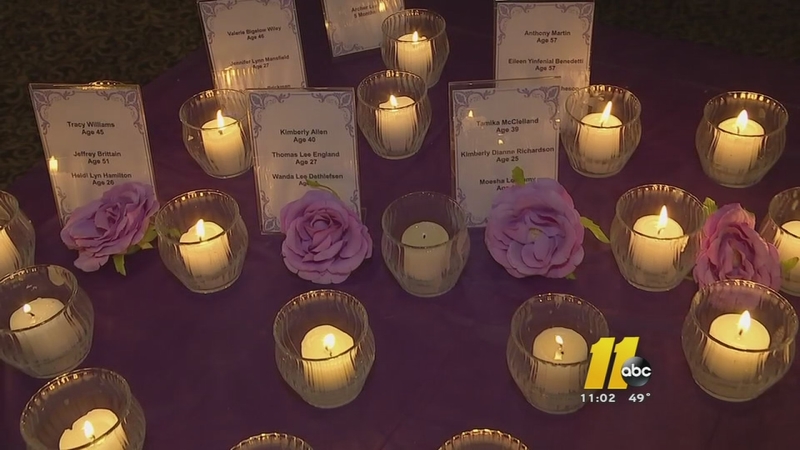 LOUISBURG, NC (WTVD) -- It was a somber gathering in Louisburg Wednesday night as Safe Space - a domestic violence/sexual assault service agency in Franklin County - held a candlelight vigil in remembrance of victims of domestic violence.

A list of the names of 37 North Carolina people killed in domestic violence cases was read.

In Louisburg, people knew one of the victims very personally. Catherine Williams came with a shirt bearing the image of her daughter Tracy. She was murdered allegedly by her ex-boyfriend Garry Yarborough.

Her family says Tracy filed for protection orders and even bought a gun, but it didn't keep her safe.

She said the system failed her daughter and so did society.

"From what I'm told, there were a lot of people in that parking lot that just passed by and I guess thought, that's none of my business," Catherine offered.

Making domestic violence all of our business was one of the main themes Wednesday. Safe Space organizers said Williams' murder was a wake-up-call.

"It hit home here. She was a friend. She was a neighbor, and her death has caused a movement in our community," explained Monica Kearney.

In fact, after years of pushing, Safe Space has finally won its battle to begin teaching its domestic violence awareness program at every Franklin County public school. For Tracy's family, this will be her legacy.

"It's helping others bring awareness, so that feels good and that's why I'm gonna continue to fight. I'm not gonna give up," said Williams' sister Michelle.

"Since that happened to Tracy, it's like a door opened up, so I don't think her death was in vain," said Catherine.

On Saturday, Safe Space is hosting a community-wide teen summit from 10 to 3 at Mitchiner's Grove Baptist Church, 32 Mitchiner Grove, Franklinton. They will focus on teen dating violence and building healthy relationships.