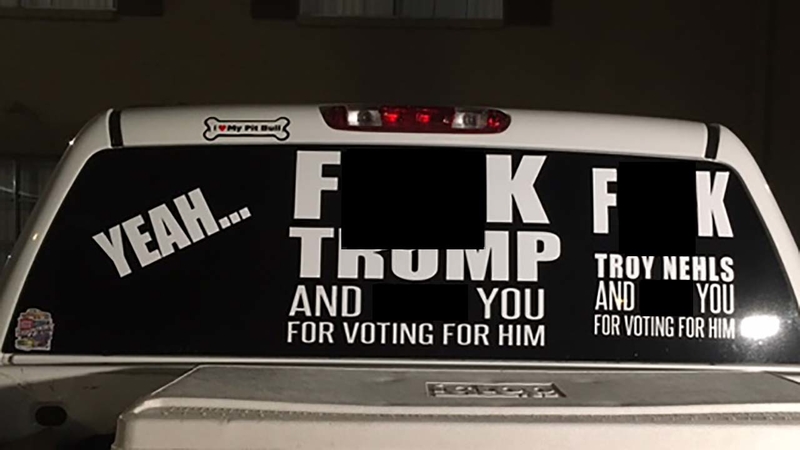 "The change came about today. We had been thinking about it and deciding that Troy Nehls didn't think twice when he put the Facebook post up and exposed me and my family. We're getting more positive than negative. I feel it was gone about the wrong way and the sticker is appropriate," Karen Fonseca said.

Nehls responded to the newest sticker.

"It doesn't surprise me. Her behavior is disgusting," he said.

On Thursday, Karen Fonseca was released from jail after she was arrested for an outstanding warrant related to fraud in 2014. Fonseca's husband, Mike Fonseca, said she was arrested at their home in Stafford in front of her 6-year-old daughter and he questioned the timing.

"I think it's the sticker," Mike Fonesca said outside the Fort Bend County Jail.

The "F-Trump" sticker was posted on Facebook by Sheriff Nehls.

"I have received numerous calls regarding the offensive display on this truck as it is often seen along FM 359," Nehls wrote on a now-deleted Facebook post. "If you know who owns this truck or it is yours, I would like to discuss it with you."

Karen Fonesca said she put the custom-made graphic up about 11 months ago.
She said her family is expressing their First Amendment rights and voicing their dissatisfaction with Trump.

"I think it's ludicrous the sheriff needed to go to Facebook to locate her," Fonseca's attorney Brian Middleton said. "He has professional detectives under his employment who could have easily found Ms. Fonseca."