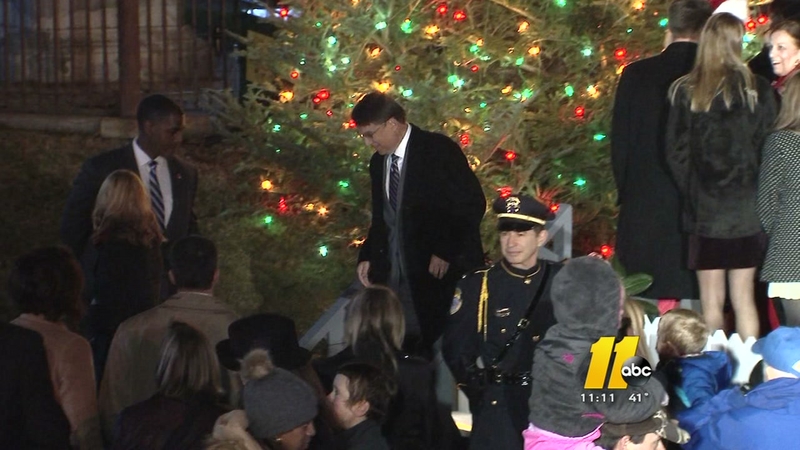 RALEIGH, North Carolina (WTVD) -- There is plenty of curiosity about what Gov. Pat McCrory's next move will be when he moves out of the Executive Mansion next month.

Reporters thought they might get their first opportunity to ask the governor about that, Thursday night - but the governor was having none of it.

Twenty-four hours after McCrory was escorted into the golden elevators of Trump Tower for a one-on-one meeting on the 26th floor with President-elect Donald Trump, the governor was back in North Carolina.

First up, a ribbon-cutting at Catawba County Community College, where Charlotte reporters were waiting to ask, "What happened in New York?"

The governor ignored the barrage of questions. He was whisked away by staffers.

He reemerged hours later, back in Raleigh, for the annual Christmas tree lighting at the State Capitol. And, even his speech to this jovial crowd was notably brief.

"All right, we got 15 seconds to light the thing! That's my speech!" McCrory said with a smile to the hundreds gathered.

With the Capitol tree aglow, the governor quickly exited. No questions taken from reporters there, either.

The media had to settle for the Christmas lights, as McCrory would not be shedding any light of his own on his meeting with the president-elect.

RELATED: WOULD MCCRORY BE A GOOD FIT IN THE TRUMP ADMINISTRATION?

So was that a job interview, yesterday?

Is there a spot for McCrory in the Trump administration?

Trump transition officials would only say, the president-elect is impressed with Gov. McCrory's "record of reform" here in North Carolina.