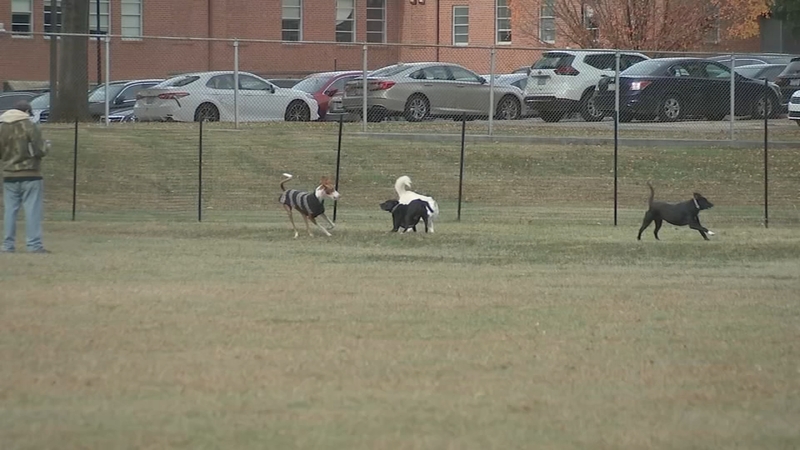 RALEIGH, N.C. (WTVD) -- Dog owners who visit a popular downtown Raleigh dog park multiple times a week are hoping the city will change course and reserve the spacious, four-acre plot of grass for their pets.

The Dorothea Dix Dog Park was designated as a temporary dog park back in April but is slated for redevelopment under the Dix Park Master Plan.

Raleigh dog owners are big fans of the temporary dog park @DixPark The 4-acre area is slated to be redeveloped into a grand entrance to the destination park, but they want @RaleighGov to consider keeping it as a permanent feature. @ABC11_WTVD #ABC11 pic.twitter.com/r6fFKGmMab

The city council is calling for design bids on the future Gateway Plaza and Play, with construction set to begin on the park's main entrance off Lake Wheeler Road in fall 2021.

Jeff Miller lives in the Brier Creek area and drives at least a half-hour from home, multiple times a week, to bring his Ibizan Hound, Kenobi to the Dix dog park.

"This is four acres of grass and it really lets dogs who like to run-- everything from traditional sighthounds who run very fast to even the small little toy breeds- are out here running," he said.

After learning many of his fellow dog owners were unaware of plans to redevelop the space, Miller created a Facebook group, that dozens of people have now joined, urging the city to "save the park!"

"The Master Plan kind of outlined ideas and visions for where dog parks could be in the future of the park," said Joseph Voska, Dorothea Dix Park Program Supervisor.

Voska said the city is open to ideas for where planners should relocate the temporary dog park when construction the Gateway Plaza and Play begins in 2021, as well as feedback on the future permanent dog parks on the Dix campus.

According to a Dog Park Study released by the Raleigh Parks, Recreation and Cultural Resources Dept. in January, there is a growing need for more dog parks. By 2023, the study projects there will be 100,000 dogs living in the City of Oaks.

Later this year, a sixth dog park will open at Kiwanis Park; a seventh is slated to open at Baileywick Park in 2021.

Still, dog owners who are drawn to the sprawling four-acres of fenced-in, grassy terrain at Dix Park, are willing to pass up other parks and drive out of their way to reach it.

"I can walk to Oakwood," said Susan Moore. "But my dogs seem to like it better here because it's really open."

"We would love to see this one stay," she said.
Report a correction or typo
Related topics:
pets & animalsraleighdogsdorothea dix parkpetpetsanimalanimal newsanimals
Copyright © 2021 WTVD-TV. All Rights Reserved.
TOP STORIES
Mark Meadows to halt cooperation with January 6 committee
Amber Alert issued for 1-year-old Randolph County girl
Everyone should get tested prior to indoor gatherings, CDC says
Toyota to build lithium battery plant in NC
50 mutations in omicron could be its downfall, data shows
Why feds are warning it could take months to get a passport
Show More
Raleigh Police plan to crack down on speeding drivers
This day in history: Pearl Harbor attacked
CEO of American Airlines retiring
Durham, Zebulon make political history with new mayors
NC unemployment improving but businesses still struggle to hire
More TOP STORIES News