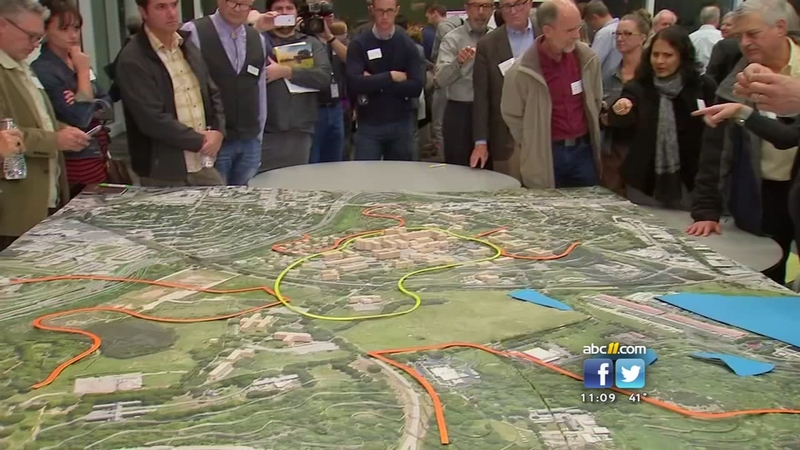 RALEIGH, North Carolina (WTVD) -- At Hunt Library on Thursday night, there were no bad ideas when it came to Dix Park.

A lake for swimming? Write it down.

All ideas were welcomed.

Inside the city's first public input forum on the master plan for the 308-acre mega parcel city leaders hope to transform into a world-class destination park, suggestions came from all corners. Many of them were scrawled across a white board.

The lime-colored circle would be the main loop around the property (think bike and running paths), the orange lines would be new access points for cars to get into the massive 308-acre property. #DixPark #MasterPlan pic.twitter.com/XTW9ueYp4d

One woman wrote, "A huge beautiful treehouse" as her suggestion for Dix. She'd also like to see an open-space restaurant with a rustic deck overlooking water.

Many wrote down original ideas. Others circled ones suggested by others.

John Bush, who lives in the neighboring Boylan Heights community circled his support for a pedestrian bridge over Western Boulevard.

Tonight was about dreaming big, and by the end of the evening, the whiteboard was packed with suggestions, a rose garden, a ballet hall, even a giant glass slide.

"Nothing's off the table," said Raleigh resident Sean Ingram who admits he raised an eyebrow about one person's idea to combat what could be new traffic tie-ups around the emerging park. "They was saying maybe we can airlift people into the park. Now I'll be honest, I thought that was a little off the wall. Like wow, that's crazy."

Hundreds of Raleighites are here to weigh in on what they want to see at Dix Park. The master planners brought this scale model along to help people dream big. #abc11 pic.twitter.com/qGggyJzuGW

The master plan for Dix has been underway since the city finalized a deal to buy the land from the state for $52 million.

A team of Brooklyn architects has been drawing up ideas and designs in the months since, laying them to the Raleigh residents Thursday night with the help of a scale model illustrating what the land could become.

The planners outlined a main loop for runners and bikers along with four new major access points at each corner of the property. The entrances would aim to open up the massive piece of land that in its decades as a mental hospital and state office hub never felt all that welcoming.

It now needs a design that feels like a gateway from every corner of the city.

In the coming weeks, the city plans to put the scale model of the park on display at an available building on the park's property.

The master plan is scheduled for its final showing on February 29.

ABC11 has decided to slowly reduce the number of stories on the website that have a comments section. We believe very strongly that our audience should have an opportunity to discuss and debate events in our world, however, we have not been able to moderate the comments as well as we would like. Instead of hosting a platform that could allow a few loud and ugly voices to dominate a conversation, we want to encourage everyone to join us on our social media platforms and speak out there. Facebook: facebook.com/ABC11 Twitter: twitter.com/ABC11_WTVD
Report a correction or typo
Related topics:
community & eventsraleighwake countydorothea dix parkwake county newsraleigh news
Copyright © 2021 WTVD-TV. All Rights Reserved.
TOP STORIES
Pedestrian killed on US 401 identified as Rolesville HS student
Parents charged in school shooting arrested, plead not guilty
Money found inside megachurch walls possibly tied to 2014 theft
COVID-19 metrics climb after Thanksgiving but still far below 2020
Contact tracing revs up as omicron cases detected in several US states
Disney On Ice returns to Raleigh, Fayetteville soon
Show More
How unusual to charge parents in school shooting? EXPLAINED
Study suggests past COVID infection may not fend off omicron
Gov. Cooper receives trees, wreaths ahead of tree lighting
Attempted robbery blamed for Black Friday shooting
Raleigh lab is 1 of dozens looking for COVID variants in US
More TOP STORIES News