COVID-19 pandemic has not slowed downtown Raleigh occupancy; rates still at or above 90 percent 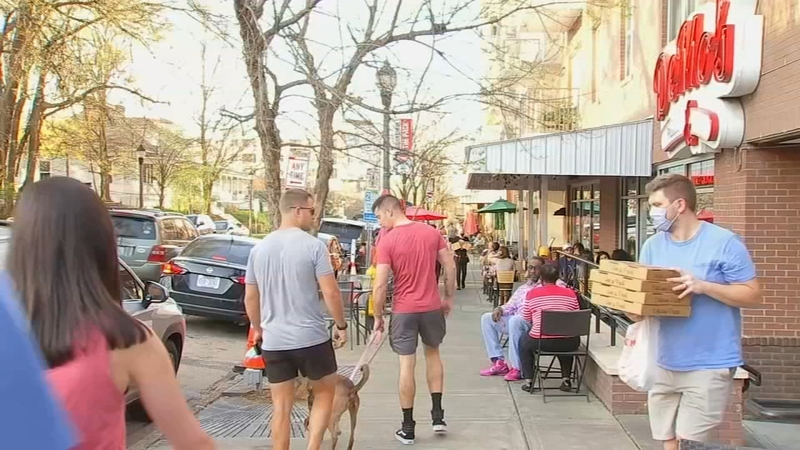 RALEIGH, N.C. (WTVD) -- Downtown Raleigh resident Wilson Owens said he sees more people out and about, now that COVID-19 vaccinations are ramping up and cases are going down.

"I think people are a little bit more, kind of open and willing to go out now," Owens said.

Bill King, President and CEO of the Downtown Raleigh Alliance, agreed and said the warmer weather is also playing a role.

"We have these pedestrian counters that are able to count foot traffic in certain intersections," King said. "The last three weekends have been three of the best days since the pandemic began. And so Saturday, the last three Saturdays, have been really, really strong downtown."

Downtown lost some businesses to the pandemic, but King said trends have been moving in the right direction since Labor Day.

"We saw a good number of closings in the summer of last year but then they've slowed," King said. "We still had some but we've had more openings than closings."

King said food and beverage sales have increased during the last two months.

Downtown Raleigh Alliance reports that in August, the occupancy rate in downtown apartments was 97 percent. In February, a spot check at six apartment buildings showed an occupancy rate at or above 90 percent.

"We've been at a high occupancy rate for years now, and over 90 percent occupied as long as we've measured it, which has been in the last six years," King said. "We're still there, even after a year of the pandemic. I actually think it's a pretty good sign of resilience for the downtown residential market."

Regional manager Ikima Hicks said some people purchased homes and moved outside of downtown. But she said they also saw people moving in from other states because of the shift to working from home.

Hicks said more than half of the building's 417 units are occupied. And she said activity is ticking up.

"January through February we've seen, like I said, six to 10 leases a week," she said.

With more apartments going up downtown, Hicks said renters can use this to their advantage.

"You're going to see some specials," she said. "If you are looking to move to downtown, I think that now is the time."
Report a correction or typo
Related topics:
home & gardenraleighcoronavirushousinghousing market
Copyright © 2021 WTVD-TV. All Rights Reserved.
TOP STORIES
Mark Meadows to halt cooperation with January 6 committee
Amber Alert issued for 1-year-old Randolph County girl
Everyone should get tested prior to indoor gatherings, CDC says
Toyota to build lithium battery plant in NC
50 mutations in omicron could be its downfall, data shows
Why feds are warning it could take months to get a passport
Show More
Raleigh Police plan to crack down on speeding drivers
This day in history: Pearl Harbor attacked
CEO of American Airlines retiring
Durham, Zebulon make political history with new mayors
NC unemployment improving but businesses still struggle to hire
More TOP STORIES News