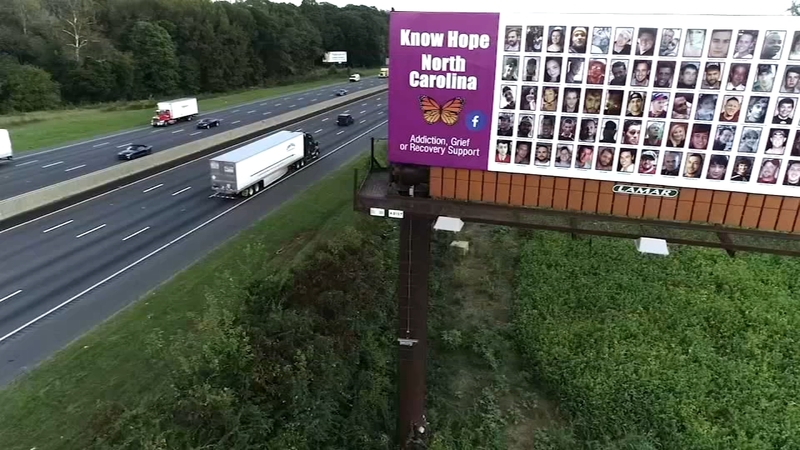 ﻿Cary mom turns heartbreak into action with I-40 billboards

RALEIGH, N.C. (WTVD) -- A Wake County mother is honoring her son and other victims of opioid overdoses by putting their faces and names on highway billboards.

"The billboards are about remembering those we have lost," said Freida MacDonald in an interview with ABC11's Steve Daniels. "The mean age on the billboards is 24, and that is out of the natural order for those of us who have lost children and certainly too young to leave this earth."

MacDonald's son Michael Hoyle, a Cary High School graduate, died from a fentanyl overdose in 2016 at the age of 24 while in recovery in Wilmington.

She wants the billboards on I-40 to put a face to the staggering number of people who are dying from overdoses.

A record-high 96,779 drug overdose deaths occurred across the country between March 2020 and March 2021, according to data released last week by the Centers for Disease Control and Prevention's National Center for Health Statistics.

"When you look at a face and you look at how young they are, you see how short the life is," MacDonald said.

MacDonald left a career in banking to start a nonprofit called Know Hope.

In addition to paying for the billboards, MacDonald helps people pay for recovery.

Shannon Rouse Ruiz found hope at the Partnership to End Addiction after her 16-year-old daughter Kaitlyn died from a fentanyl overdose in Kinston.

"I knew I was not alone, and I knew I had someone to hold my hand and guide me through this journey," she said.

Rouse Ruiz is now a volunteer with the organization and directs others toward helpful resources.

MacDonald's ultimate goal is to keep people off the billboards, as she pays tribute to young North Carolinians who have died from opioid overdoses.

"It is honoring them," MacDonald said. "They fought a hard battle, and they left here far too soon, and I am honored to be able to honor them."