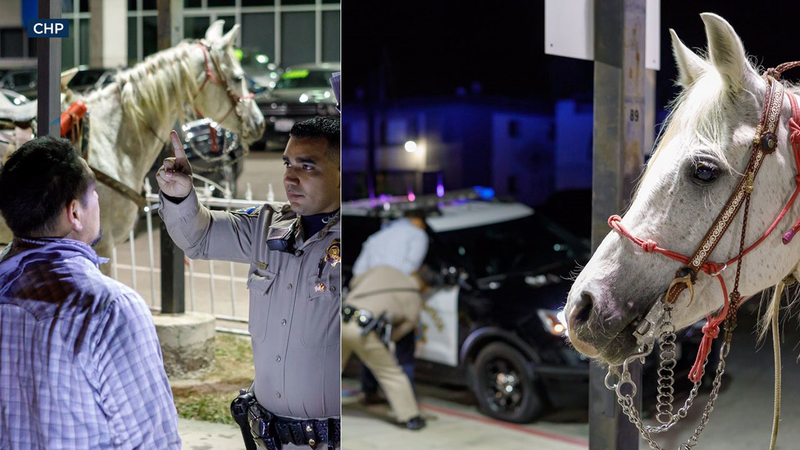 LONG BEACH, Calif. -- A man who tested twice the legal limit for alcohol rode his horse onto the 91 freeway on his birthday, according to the California Highway Patrol.

CHP officers responded around 1 a.m. Saturday to a report of a man riding a white horse on the eastbound 91 from Paramount Boulevard to Downey Avenue. Officers found the man on his horse after he had exited at Downey and rode into Bellflower.

They stopped the man and administered field sobriety tests, with results of .21 and .19 percent - or more than double the legal limit.

The man was arrested and booked for riding a horse under the influence.

He was identified as Luis Alfredo Perez of Placentia, with police documents indicating he turned 29 years old shortly before he was spotted on the freeway.

His horse Guera was unharmed and was released to Perez's mother.

The CHP offered a simple message to the public: "No, you may not ride your horse on the freeway, and certainly not while intoxicated," the agency wrote on Twitter.

So a horse walks onto the 91 freeway...no joke. Rider arrested by CHP for DUI in the greater Long Beach area. Don’t put yourself, your beautiful animal, or others in danger of being killed in traffic. @CBSLA @NBCLA @KTLA @ABC7 @FOXLA @CNN @FoxNews @ABC @NBCNews @CBSNews @CHP_HQ pic.twitter.com/YdiL54ctvQ

No, you may not ride your horse on the freeway, and certainly not while intoxicated. #CHP pic.twitter.com/IQ09Qgeq4j