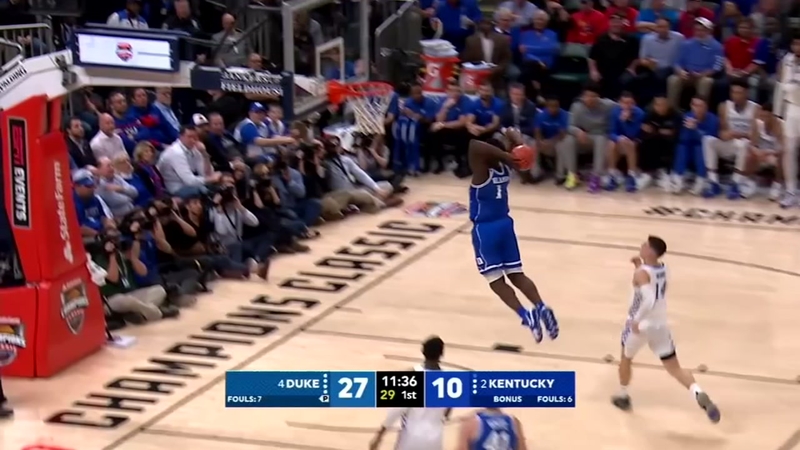 Duke breaks record for most weeks at No. 1

NEW YORK -- Duke has supplanted Kansas atop the new AP Top 25 poll after its dominating win against Kentucky, giving the Blue Devils a record number of appearances at No. 1.

The Blue Devils jumped from fourth to first in Monday's first regular-season poll. That allowed Duke to set a record with its 135th week at No. 1, breaking a tie with UCLA for most all-time. It also marked the third straight season that Duke has spent at least one week at No. 1.

The Atlantic Coast Conference has seven teams in the top 20:

Duke (2-0) claimed 48 of 65 first-place votes after beating then-No. 2 Kentucky by 34 points in the Champions Classic to open the season, the program's most lopsided win against a top-5 opponent. The Blue Devils followed that with a win Sunday against Army at Cameron Indoor Stadium.

Duke's Kentucky win was impressive enough to bump the preseason No. 1 Jayhawks, who fell to No. 2 despite a quality win of their own against then-No. 10 Michigan State in the Champions Classic's first game. Kansas went from having 37 first-place votes in the preseason to just 14 this week.

Gonzaga stayed at No. 3, followed by Virginia and Tennessee each climbing a spot to round out the top 5. Nevada, North Carolina, reigning national champion Villanova and Auburn were next, while Kentucky slid eight spots to No. 10.