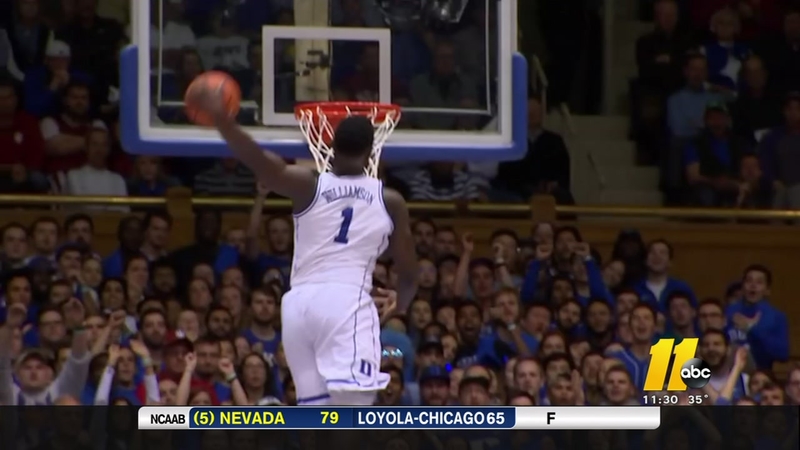 DURHAM, N.C. (WTVD) -- In terms of learning how Duke would handle its first loss of the season and loss of its number one national ranking, a rematch with Gonzaga might have been more instructive.

Indiana was next on the schedule. What looked like an exciting showdown between Duke's frosh phenoms and Indiana's own first-year wonder Romeo Langford ended up going the complete opposite way.

It was too easy.

Duke back home reverted to the awesome aerial killing machine we've seen a few times already this year. The season opener versus Kentucky remains the benchmark, but Duke's first-half performance Tuesday night was in the neighborhood.

This team is breathtaking at its best. It's not that they score, it's the manner in which they score. Mindblowing dunks and end to end waves that crash against the backboard.

Zion continues to be effortlessly efficient. He went 11-15 and scored 25 points.

The story to watch right now might be the continued ascendance of Tre Jones. He's the conductor of this often devastating orchestra and was again versus the Hoosiers. He had fifteen points, 8 assists, and not a single turnover.

Indiana didn't have the horses to hang around for more than 10 minutes in this one, so Duke wasn't forced into any game pressure. They did have to endure a second-half tongue-lashing from Mike Krzyzewski at 61-38 when he thought their effort was not up to par, but that was mostly about not coasting.