Gary Trent Jr. had a career night for Duke with 30 points, (Lynne Sladky)

The Blue Devils scored 15 points in only six possessions to rally, and the comeback included a trio of 3-pointers by Trent. He shot 9 for 14, including 6 for 9 from beyond the arc.

Duke (16-2, 4-2 Atlantic Coast Conference) extended its winning streak against ranked teams to seven games, including four this season. Miami (13-4, 2-3) lost at home for the first time this season.

Marvin Bagley III had 13 points and 12 rebounds for the Blue Devils, who shot 55 percent and won despite tying a season high with 19 turnovers. They committed none in the final 10 minutes as they rallied.

Grayson Allen and the Duke Blue Devils toughed out a win at Miami on Monday night. 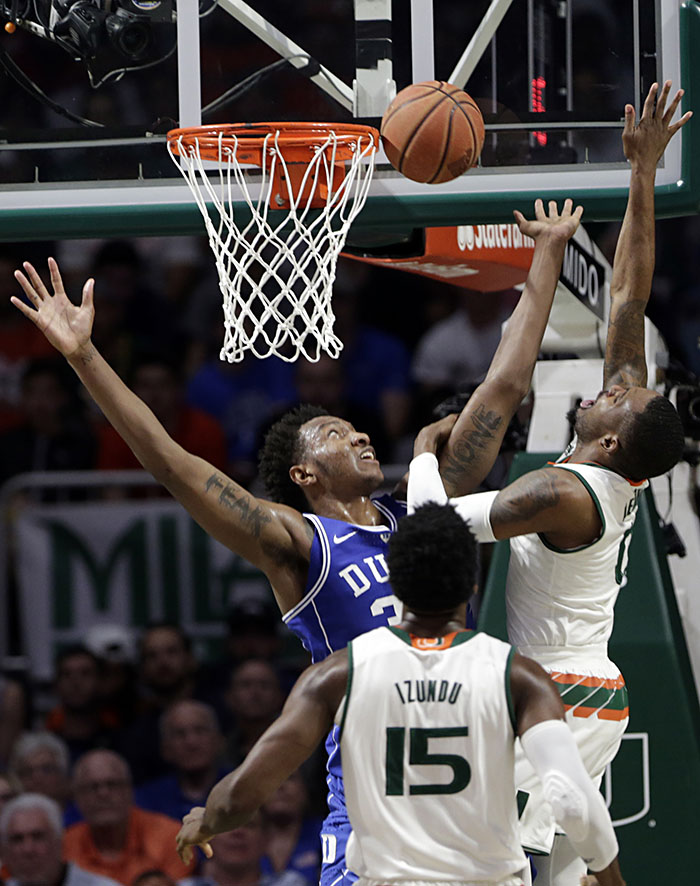 Krzyzewski's sport coat came off when the Hurricanes forced three turnovers during a 16-0 run that put them up 56-44. Duke went nearly eight minutes without a point, and Bagley missed four free throws during the drought.

Smothering defense helped the Hurricanes outscore Duke 31-6 on fast-break points. They led 66-53 with eight minutes left, but the Blue Devils went on a 9-0 run on their next three possessions. Trent sank consecutive 3-pointers, and Bagley's three-point play made it 66-62.

Wendell Carter drove for a basket to tie it at 66, and Trevon Duval's driving layup on Duke's next possession put them ahead with 4:40 left. The Blue Devils' lead reached 71-66 before Brown ended Miami's drought with a three-point play.

Grayson Allen made a backcourt steal and fed Trent for a buzzer-beating 3-pointer to end the first half and give Duke a 42-40 lead.

Duke came into the game second in the nation in scoring at 93.2 points per game, and Miami was fifth in scoring defense at 60.7 points.

Bagley gave Duke fans a scare when he left the game holding his right wrist in the early going, but he soon returned.