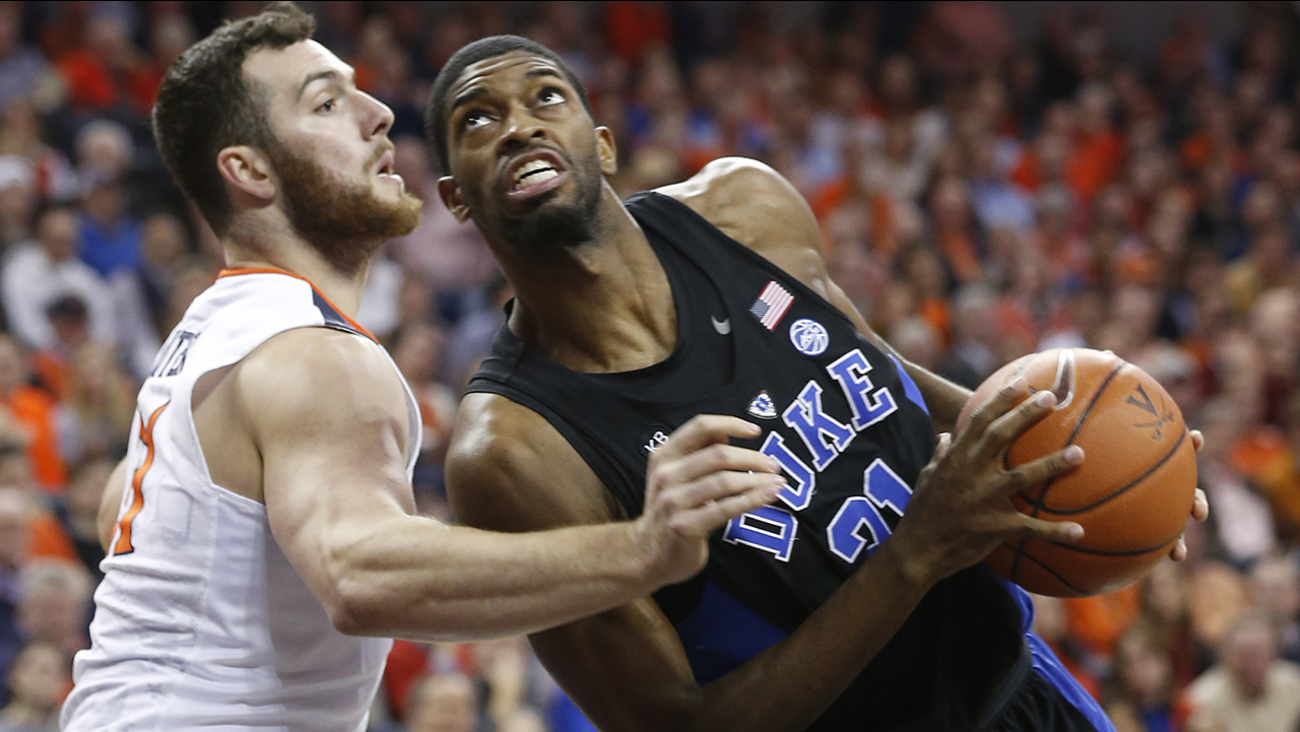 CHARLOTTESVILLE, Virginia (WTVD) -- Mike Krzyzewski took a unique approach to coaching after No. 12 Duke went into halftime trailing No. 14 Virginia 25-21.

It might best be described as getting out of the way.

Moving away from called offensive plays and to a system that highlights the Blue Devils' individual abilities, Krzyzewski's shrewd move freed up freshman Jayson Tatum for a spectacular second half, and he led Duke to its sixth consecutive victory, 65-55, on Wednesday night.

"We were just trying to move the ball and give them the opportunity to be basketball players, which they are," Krzyzewski said.

None benefited more than Tatum, who scored 21 of his 28 points after halftime, and three times made 3-pointers with the shot clock racing toward 0:00. All three of the clock-beating shots came after Virginia had pulled within 43-42 with 8:33 left. The last made it 54-44.

Jayson Tatum had a career-high 28 points for Duke against the defensive-minded Cavaliers.

"That was a big-time performance," Krzyzewski said, laughing. "I mean, jiminy Christmas. It's why we won for crying out loud."

Luke Kennard added 16 points for the Blue Devils (21-5, 9-4 Atlantic Coast Conference), who are tied for second in the league with Florida State and Louisville. All three are a game behind No. 10 North Carolina, which beat North Carolina State 97-73 earlier Wednesday.

Tatum came into the game just 19 for 60 from beyond the arc, but was 6 for 7 against the Cavaliers and 8 for 12 overall. He seemed to hit his stride last week when he scored 19 second-half points to propel the Blue Devils past rival North Carolina.

"It was a great team effort," Tatum told ESPN on Wednesday night. "To get this win, it was great for us."

The loss was Virginia's fourth in six games. In all four games, the opponent shot 50 percent or better after halftime.

Virginia trailed 43-37 before Perrantes made two free throws and Kyle Guy had a 3-pointer, making it 43-42 with 8:33 remaining. But Tatum hit the first of his three clock-beating 3-pointers, Kennard scored in the lane and two more 3s for Tatum put Duke ahead 54-44.

"Every time we needed a stop, they put a dagger in us with a late shot clock or a deep 3," coach Tony Bennett said.

Other than exceptional 3-point field goal defense, the Blue Devils aren't known much for their ability to stop others, but they have the pieces to make things very tough. Virginia often had trouble getting inside, and once there, navigating around the Blue Devils big men.

"Matt's been like the key guy for us," Krzyzewski said of senior Matt Jones, who always guards the other team's best player.

"They really guarded us hard," Bennett said. "It was one of those games where you had to work to get catches."

The Cavaliers' lack of a reliable inside scorer hurts more some nights than others, and even more so when attempts to feed the ball inside often result in turnovers. Effective outside shooting often opens up the inside, but Virginia shot poorly against the Blue Devils (21 of 57, 36.8 percent).

"We have some limitations in some areas, but we're fighting like crazy," Bennett said.

Duke is at home against Wake Forest on Saturday. Virginia travels to Chapel Hill to face No. 10 North Carolina on Saturday night.