Bring on the hair! Duke doctors taking part in 'Movember' 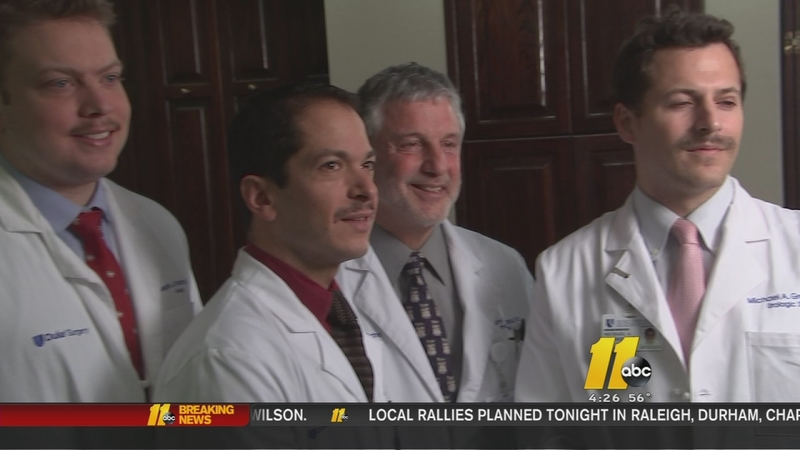 Bring on the hair! Duke docs taking part in 'Movember'

DURHAM (WTVD) -- Doctors and residents at Duke Medicine are growing out their facial hair all for a good cause. Maybe you've heard of "No Shave November?" Well, they call this "Movember," and they're using it to raise awareness for men's health.

Specifically, Duke doctors, residents and undergrads are all raising money for men's health issues such as prostate and testicular cancers. It's a subject that hits home for Colton Vallery, who was diagnosed with cancer two years ago during a routine check-up, something he never expected.

"Not in a million years, you could have knocked me over with a feather when my doctor told me I had cancer," Vallery admitted.

Luckily, it was caught early, so a simple surgery at Duke was all it took to remove the cancer. That's why he's eager to help spread the word.

"Get screened, get your annual physical. I've had no regrets, and I'm cancer free," he said.

Likewise, Dr. Anthony Galanos, a professor of medicine at Duke, found himself on the other end of a diagnosis. But, like Vallery, he's been cancer-free since his surgery thanks to an early detection. It's something he says other men need to take seriously.

"The emphasis on women's health is very appropriate. My sister died of breast cancer. I'm a big supporter of women's health, but it's about time we woke up the guys. We tend to be stupid and think we can overcome anything with just willpower," said Dr. Galanos.

And just as he interjected humor into his serious message, the Duke participants in Movember are certainly having fun with their fundraising efforts, although they admit their significant others might not be as thrilled.

"They're probably not having as much fun. A lot of them gripe about the mustaches, but we're having a lot of fun because we all grow it out all month long. We've been watching each other through the various stages of mustache growth, and kind of make fun of each other," said mustached Duke Urology resident Michael Granieri.

By the end of November, a Duke Medicine photographer hopes to have a time-lapse and some other media to show the mustaches as they've evolved over the month. Meanwhile, you can follow participants on Instagram (@modukes2014), Twitter, Facebook, and fundraising page Movember.com.