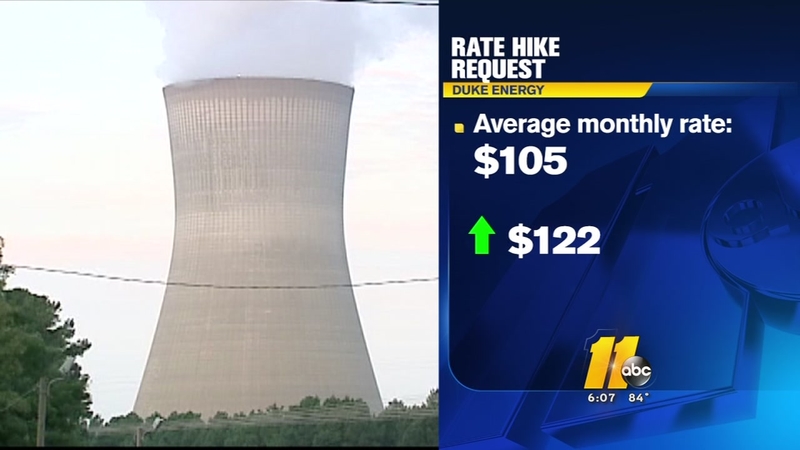 The typical household customer of Duke Energy Progress, which operates in much of eastern North Carolina and around Asheville, would see an average 16.7 percent increase, or about $17.80 more per month for a total $122.48 starting in January, if the North Carolina Utilities Commission approves the request. Industrial and other customers would see rate increases of other sizes.

The nation's largest electric company filed its request for an extra $477 million a year with state utilities regulators for the subsidiary's 1.3 million North Carolina customers. A separate request affecting Duke Energy Carolinas customers in Durham and western North Carolina could come before the state Utilities Commission later this year.

"Our customers tell us they want electricity that is more reliable and increasingly clean, and they also want more value and choice every day," said David Fountain, Duke Energy's North Carolina president. "It is critical that we, as their energy provider, balance these needs with smart investments that keep costs reasonable and keep North Carolina competitive."
The utilities commission will hold public hearings and take written comments about the proposed Duke Energy Progress rate increase before making any decision.

Duke Energy said it has spent more than $725 million out of a total estimated to cost $5.1 billion to excavate coal ash and move it away from waterfront sites, while drying out and capping pits containing most of its coal ash. Duke Energy Progress is asking North Carolina regulators to allow it to recoup $332.5 million of the coal pit closure costs over the next five years and another $129 million a year for ongoing closure costs, the company said.

Consumers should bear the costs after enjoying low-cost power from coal-burning plants, CEO Lynn Good and other Duke Energy executives have said. The company also said it stored coal ash in line with industry practices and regulations in place over preceding decades.

"We are transitioning to a cleaner generation mix, closing older, less-efficient coal-fired plants and shifting to natural gas, carbon-free nuclear and expanded solar energy," said Fountain. "Through these investments, we are providing customers cleaner, more reliable energy and have laid the foundation for a smarter energy future from which all North Carolinians can benefit."
Opponents say the utility's shareholders should pay for all coal ash to be moved to stop the continuing pollution of groundwater and rivers with leaks containing mercury, arsenic and other heavy metals.

Charlotte-based Duke Energy is pursuing an extensive construction spending plan that it will seek to charge its 7.5 million electricity customers in the Carolinas, Florida, Kentucky, Ohio and Indiana.