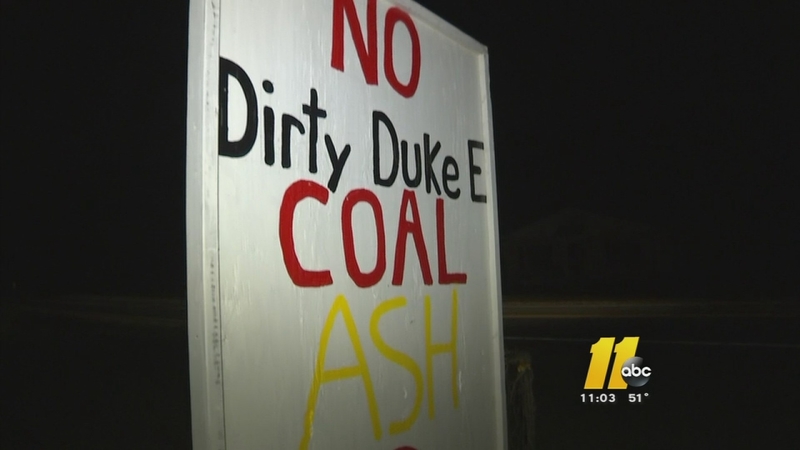 Coal ash to be trucked through neighborhood

MONCURE, NC (WTVD) -- Residents who live near the old Brickhaven clay mine in Moncure say they've received letters from Duke Energy informing them coal ash will be trucked through their community.

Angie Miller has lived in the area all her life.

"This is home, I mean this all I've ever known," she said.

Her little stretch of Chatham County is precious to her. She got Duke's letter in the mail along with her neighbors and is concerned about the company's plan to dump millions of tons of coal ash in the old mine right down the road from her house.

"It's right through the woods," she said. "Nobody wants it! I mean we've had meetings about it, but it's a done deal. We have no choice. They don't care about our opinions."

As early as this week, Duke Energy contractor Charah Inc will begin transporting tons of coal ash from its plant in Wilmington and one near Charlotte to the old abandoned clay mine on Flatwoods Road. It will mean 40 trucks a day until Duke is able to install its own rail line to the site to haul the coal ash.

"There's been lots of opportunities for the public to have input and we're committed to keeping them informed," said Jeff Brooks with Duke Energy.

After the massive coal ash spill in the Dan River in February 2014, Duke Energy is complying with a new state mandate to move its coal ash waste to safer confines. Chatham County's clay mine fit the bill.

"It will be then stored in this fully lined structural fill that has multiple layers of natural and synthetic barriers where it will be stored permanently there as part of a structural fill project," Brooks explained.

But residents like Miller say there's nothing Duke can say to ease her concerns.

"No cause we don't want it here. This is home and if it's so safe, then why not keep it where it was?" she asked.

Under the state's coal ash management law, Duke has until 2019 to safely transport and store its coal ash waste from across the state. The company continues to insist coal ash is not toxic, and when Moncure's mine is finally filled in it could be re-used - perhaps as a park.