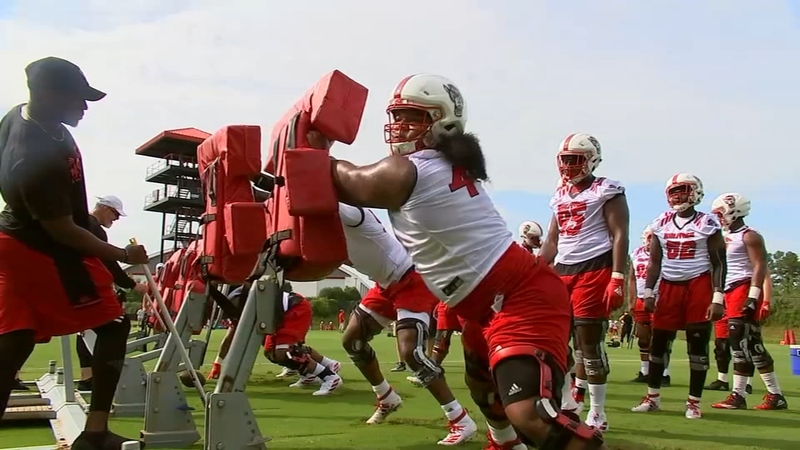 Mack Brown, David Cutcliffe, and Dave Doeren all gave some version Friday of the sentiment that football doesn't really start until the pads are on. That aside, football is underway at all three Triangle ACC schools. Duke was first out of the chute Friday morning bright and early.

David Cutcliffe has not been bashful about his defense, saying it could be one of the best, if not THE best units since his arrival in Durham. He's especially high on his defensive line and linebacking crew, which is something to say given some of the guys they've lost. There was some troubling news Friday as Cutcliffe updated the status of star cornerback Mark Gilbert, the former Terry Sanford standout. Gilbert, it turns out, had a second surgical procedure during the offseason and is not yet healthy enough to go as he attempts to return from a hip injury suffered early last season.

Over in Chapel Hill, Mack Brown was effusive about defensive lineman Jason Strowbridge, having laid eyes upon him for the first time in person. Brown called Strowbridge "an NFL player" and said he and Aaron Crawford have the chance to be a formidable interior on the Heels defensive line. Brown was also happy with the increased accountability he's seen from the team. He said that before, everyone was too nice to each other and not willing to call out teammates not putting in the effort. According to reports from strength coach Brian Hess over the summer, that's no longer the way things are handled. Teammates are demanding the best from each other.

Running back Michael Carter was among several Tar Heels who spoke about the constant emphasis the coaches are putting on finishing strong, be it in workouts or in practice. Weights will be clanking, then everything will stop as a coach announces it's the "4th quarter" and demands intensity until the workout ends. Carter, Strowbridge, and Crawford all said it's much more of a mental than a physical thing. The ability to push through adversity is not something the Heels have shown in recent years. They're hoping that changes this season.

The QBs are obviously the focus. One of Jace Ruder, Cade Fortin or Sam Howell will win the job eventually. Mack wouldn't put a timeline on things but said he and offensive coordinator Phil Longo are going to make camp as difficult as possible on the three hopefuls. Every pass they throw will either be moving them up or down the depth chart, Brown said. Whoever survives the gauntlet best will have won the job under as close to the same duress as they'll face in the regular as possible if Brown and Longo do things right.

The QBs are also the primary headline at NC State. Matt McKay was named the Alpha Wolf award winner for the offense Friday. That's an honor that goes to the best leader over the summer. That intangible quality coupled with his familiarity with the offense and the fact that he's the only one of the three guys vying for the job to have taken an actual game snap give him an early lead. As Doeren cautioned though, things are just beginning, there are countless reps ahead under increasingly complex situations. It's not a job that'll be won in the next week or even two. Devin Leary, Bailey Hockman, and McKay will likely all have their bright spots and bumps before August 29.
Report a correction or typo
Related topics:
sportsraleighdurhamchapel hillnc state wolfpackduke blue devilsunc tar heels
Copyright © 2022 WTVD-TV. All Rights Reserved.
TOP STORIES
Activists call for arrest of Raleigh woman in Emmett Till case
12-year-old, mom badly burned in science experiment explosion
Flight delays, cancellations worry some travelers
'Miracle baby' improving thanks to last-minute treatment
Tropical Storm Bonnie forms in Caribbean Sea
NC 2-month-old killed, parents charged
2 officers killed, others injured in Eastern Kentucky shooting: police
Show More
FBI raids Fayetteville church accused of operating as a cult
Homeownership becoming more expensive in the Triangle
Family member beats shark to free teen girl from its jaws
2nd visitor in 3 days gored by Yellowstone park bison
California late start law aims to make school less of a yawn
More TOP STORIES News