Duke vs. UNC Part 4 -- this time to fight teen cancer 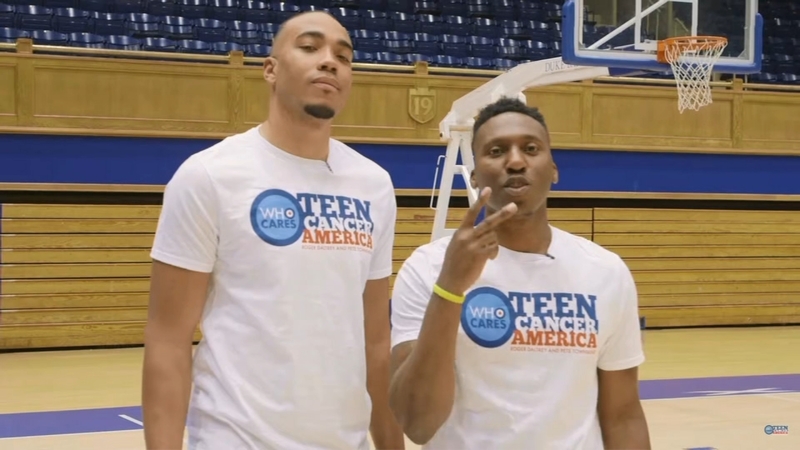 DURHAM, N.C. (WTVD) -- This summer, it will be Duke vs. North Carolina Part 4 -- but not for an ACC title or a No. 1 seed -- this time it's for something bigger than basketball.

"This year, I was like it's the third year, it has to be bigger and better," said former Duke player Nolan Smith, now the director of basketball operations for the Blue Devils. "I was fortunate to have a close friend in (former UNC star) Brice Johnson. He was like, 'Yo, let's do something bigger, I want to be a part of it.' Boom -- Team Duke vs. Team Carolina, Nolan vs. Brice came about."

Duke and UNC will go head-to-head to see which school can raise more money for Teen Cancer America, playing a two-day hoopathon at the Smith Center on August 25 and Cameron Indoor Stadium on August 26.

"Me and Nolan are the best of friends other than when we play each other, he can tell you that," Johnson said. "Outside of basketball, we're like a big family."

Raising money for cancer is more than helping out the community for Johnson, it is also a way to honor his mother, who he lost to cancer in 2008.

"I always think about my mom daily," he said. "It's something you can't control but at the same time you can't help the situation. Back then I couldn't help with what she got or what was going on but at the end of the day, I can control and be able to get through what they're going through right now."

With the help from Johnson and Carolina, Smith, a Teen Cancer America ambassador, is hoping to show teenagers battling cancer they aren't alone.

"I've learned so much," Smith added. "First, I've learned how valuable life is and that it can turn like that. For anyone going through the battle of cancer, it's just not fair."

Johnson has a similar outlook.

"This year I look forward to meeting a lot more people and be able to get those emotional connections or just those connections with a couple of the patients and be able to tell them that this is for you," Johnson said. "I really appreciate the fight you're going through and I understand the fight you're going through just because what my mom went through."