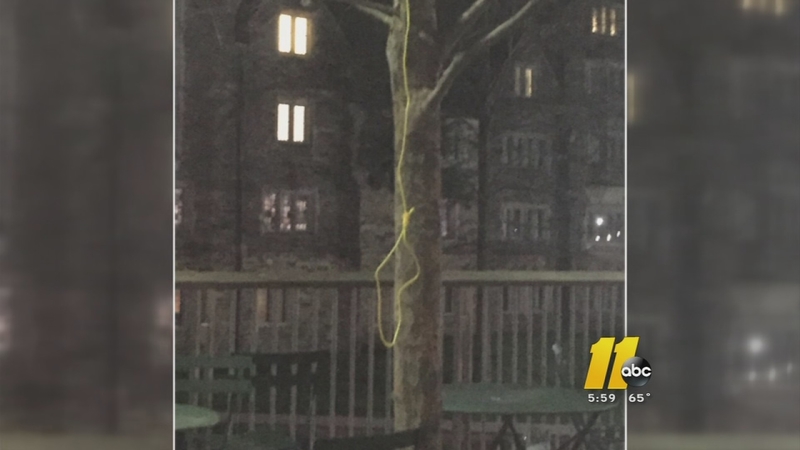 DURHAM (WTVD) -- More than 500 students, some waving signs, gathered in front of Duke Chapel's steps waving to listen to several Duke University and campus leaders talk about the outrage over a noose on campus.

The group "Duke People of Color Caucus" sent ABC11 video showing police officers photographing the noose which was found in the Bryan Center Plaza between 1 and 2 a.m. Wednesday.

Broadhead says they still don't know the intentions of the person who hung the noose, but there's no doubt it's offensive.
"I'm sorry. A noose hanging on a tree in a southern state of The United States -- this is a symbol that is an allusion to the history of lynching," Broadhead said.

Images of the noose made the rounds on social media sparking raw emotion. Duke officials, students, and professors alike expressed their collective disgust over the discovery.

Linda Burton, the Social Sciences Dean, said her son-in-law's grandfather was lynched in Wilmington which made the incident personal for her.

"We are so much more than what is likely a smaller group of people with little minds," Burton told the crowd.

Vice President for Student Affairs Larry Moneta, in an email to students, called it a hateful and stupid act that will have the opposite effect if it was intended to create fear.

"I can't begin to describe the disgust and anger I felt, and still feel," said Moneta. "... cowardly acts of bias and hatred will strengthen our resolve to love and support each other.

The president-elect for Duke Graduate and Professional Student Council Abigail LaBella said students and faculty should remain vigilant in noticing acts of hate.

"Those that propagate hate will not feel welcome here at our Duke," said LaBella.

Earlier, Duke's Black Student Alliance led a peaceful march on campus, which came after another recent race-related incident also under investigation on campus. Some criticized what they called a reactionary response to an ongoing problem.

Leaders with the student government called the rally a start of a continuous conversation about race and discrimination.

Student leaders with various cultural groups on campus are already working together to ramp up efforts against prejudices on campus.

"Today I'm asking of us to say something else. Not, 'This isn't us,' but, 'This cannot be us and this will not be us,'" said student government president Lavanya Sunder.

Anyone with information about who may have placed the noose was asked to call Duke Police at (919) 684-2444.