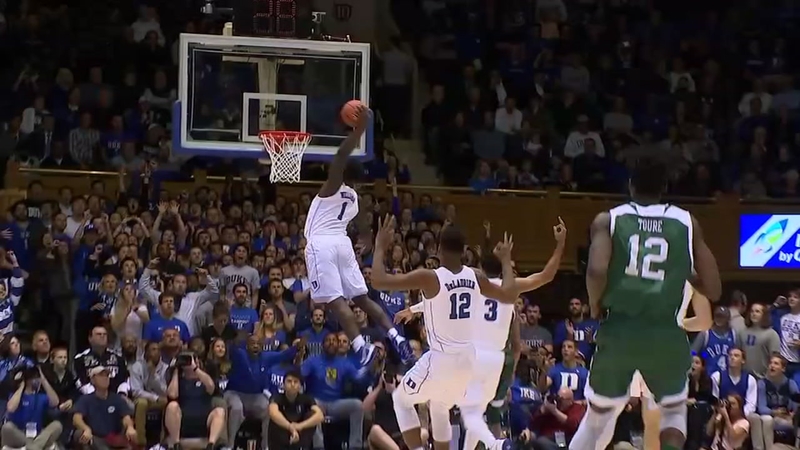 DURHAM, N.C. (WTVD) -- Look - I'm not going to try to convince you that Eastern Michigan was ever going to hang with Duke, but the Eagles are far from an incompetent group. They just were forced into looking the part Wednesday night at Cameron Indoor. The demolition was complete by halftime, by which time the Blue Devils had built a 48-13 lead en route to an 84-46 win.

It was predictably the defense that had Mike Krzyzewski most chuffed after the game. Duke held EMU to just 31 percent shooting for the game (17 percent from three), surrendered only three free-throw attempts and forced 19 turnovers. It was suffocation.

"Everything we did kind of worked," coach Mike Krzyzewski said, "but the reason it worked is because we played so hard."

With offensive executioners like Zion Williamson and RJ Barrett at the other end, that suffocation usually turned sensational.

Zion, of course, sucks all the oxygen out of the building with his adjective-defying dunks. He led the way with 21 points to RJ's 20.

The best of Zion Williamson as Duke routs Eastern Michigan.

"It is great to be No. 1, but nobody really cares who's No. 1 right now," Williamson said. "The goal is to win a championship in March."