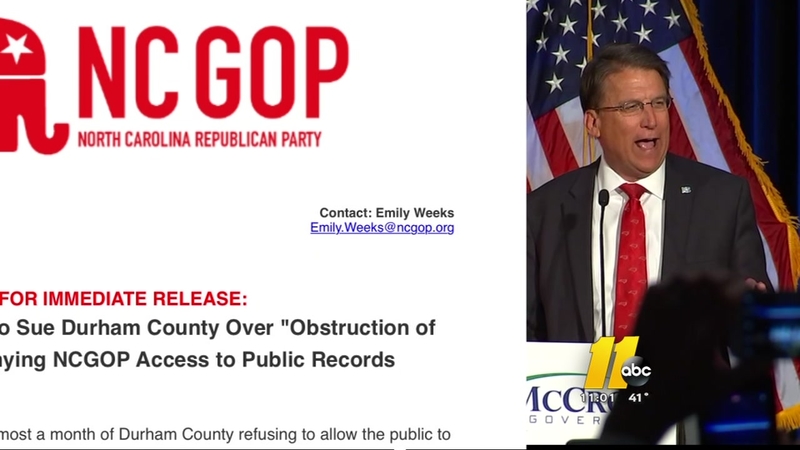 DURHAM (WTVD) -- The North Carolina Republican Party is threatening to file a lawsuit against Durham County.

In a news release sent out about 4 p.m. Friday, the NCGOP said it has been asking Durham County to allow the public to view 6,000 absentee ballot envelopes for about a month.

It said it wants to review those envelopes to root out any possible voter fraud. It also said though the Durham County Board of Elections made those envelopes available on Thursday at 1 p.m., the process was anything but easy.

"They (volunteers) were given 100 envelopes at a time and required to review one stack at a time and finally talked them into two," said NCGOP attorney Tom Stark. "I hear at the end of the day they let them go to three stacks. That's no way to get through 6,000."

Durham County attorneys say the volunteers had until the end of the business day to count, but that the group left about 4:30 p.m. Stark said regardless, they were never going to get through all the ballots in that time frame.

The Durham County Board of Elections said they could continue to review those envelopes next week, which is after the recount of more than 90,000 votes is due on Monday.

Republicans accuse Durham County of slowing down the process at every turn.

Attorneys for the county say that is not the case, and in a blanket statement said:

"The Durham County Board of Elections is following the State guidance on the review of public records by redacting the confidential voter information and prioritizing the completion of a recount. This action is in accordance with both State Board of Elections guidance and the public records law. The Board of Elections dedicated a staff of bi-partisan individuals that took several days to redact over six thousand envelopes. We have thus been working steadily and diligently toward compliance with their request and hope to complete it by next week. Prior to receiving a Monday 7PM deadline to complete recount we made redacted absentee envelopes available for review. The GOP team left early before the close of business on Thursday and we indicated we would resume review after the recount was complete, early next week."

When asked why the NCGOP believes Durham County would purposely slow down the process, Stark said he didn't want to speculate, but that the entire process has him "perplexed."