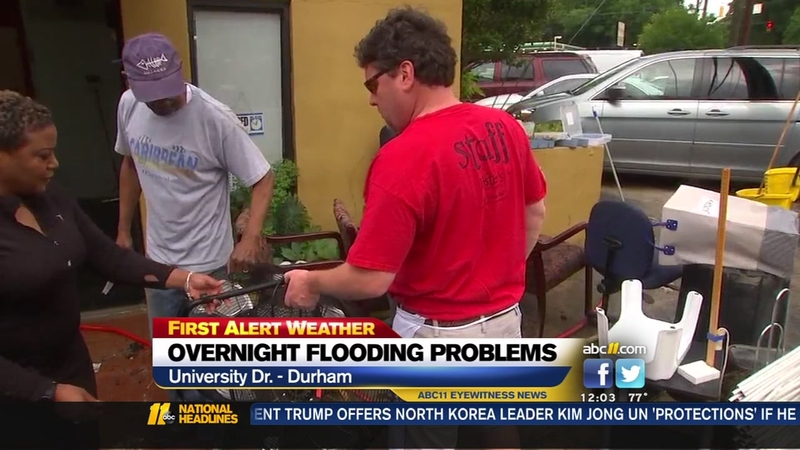 DURHAM, NC (WTVD) -- Nana's restaurant off of University Drive in Durham is no stranger to flooding.

The restaurant, which has been open since the early 90s, spent late Thursday night into the early hours of Friday morning cleaning up yet another flood.

The waterline has reached at least three feet high on one door.

In front of the 26-year-old establishment, a hole opened up in the bike lane on University Drive. "It's a hole, I'm sure that goes all the way to my building," said Scott Howell, owner of Nana's.

Howell said the city of Durham and the DOT passed the buck for years when it comes to dealing with the problem. "I've been in Durham a pretty long time, and I'm worn out."

For 26 years Howell has served his customers. Now, he's reconsidering. "I can't close Nana's. There's too many people that have jobs... but I may have to," he said.

The DOT is scheduled to replace the culvert that lies below University Drive. That will shut down and divert traffic for six months starting in September.

But tenants and Howell wonder when will the work actually be done this time around.

Lisa Dyer's husband's tailor shop was just steps away from Nana's for years.

The shop lost small things, like buttons and scrap material, but no customers clothes were lost.

Dyer said they love the location and they don't want to leave.

"We've also been depending on the word of the city and the DOT that the repairs were going to be made, so we're trying to hold on," said Dyer.