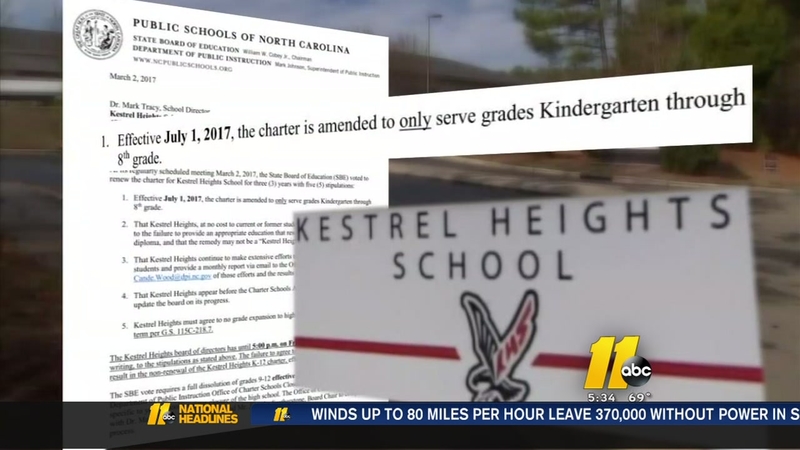 DURHAM (WTVD) -- The board of Durham's Kestrel Heights charter school has voted to appeal a State Board of Education decision to shut down its high school.

The state board voted to turn Kestrel Heights into a K-8 school after learning about problems over an eight-year period in which students were given diplomas despite not completing required classes.

More than 280 undergraduate students will have to transfer to other schools and two dozen employees could lose their jobs.

The state says that during an eight-year span, 160 graduates received a diploma they did not earn. Those students skipped mandated classes, such as English and math.

A new principal discovered the problem in July and self-reported the issues.

Kestrel Heights Executive Director Dr. Mark Tracy says board members feel they never got the chance to defend themselves.

"We didn't have as much time. We had very little face-to-face contact with the state board and there's an opportunity to communicate specifics," he said. "Our focus with the appeal is to make sure that feel that the state board gets the complete picture of Kestrel, what changes have occurred, and who we are as an organization."

The Department of Public Instruction isn't sure when the Board of Education will take up the appeal. Kestrel Heights has until Monday to send an appeal letter to the state.

The state has put the high school on the fast track to close by June 30.

The Department of Public Instruction is setting deadlines and is sending a specialist to Kestrel Heights next week to help with the transition.

"We are reaching out to those directors and saying 'Hey, here's what our situation is...here's kind of where we're at' and seeing what's possibilities there are and those conversations are still ongoing," explained Tracy.

ABC11 has learned Kestrel Heights received more than $5.5 Million in state funding for the 2016-2017 academic year.