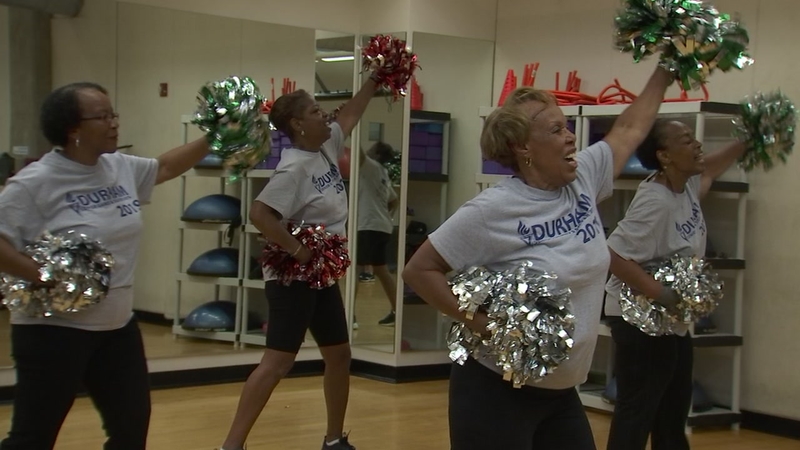 Age ain't nothing but a number for the Durham Divas

DURHAM, N.C. (WTVD) -- The Durham Divas, a seniors cheerleading squad, don't care how old they are or how much coordination they have. For the Divas, it's all about continuing to move and live.

The Divas put it perfectly in one of their cheers when they say "their hips still move, yes they can shake but not too hard because they may break."

"Age is but a number," said team captain Louise Gooche. "You know you do what you can do regardless of what your ages are."

At 76, Gooche is still moving and grooving. The captain of the squad founded the Durham Divas in 2004, two years after she was diagnosed with cancer.

Lucinda Lathan is the baby of the group at 39 years old.

"It's the picture of perseverance" said Lucinda Lathan. "Everything that they do ... when they come in, they have overcome something to come in."

As a former cheerleader herself, she took on the role of coach.

"It's been amazing being with people of color as well," Lathan said. "You're really seeing people who have paved the way. This is living history. I get to talk about things that maybe they didn't get to talk about when they were younger."

The Divas compete in the Senior Games each year and have won Gold nine times but it's not about the medals for the Divas, it's about moving together and camaraderie.

"To see them perform and to see the joy that they bring when they are in front of a crowd, the joy blows back their faces," Lathan said. What people don't know is that joy is an overcoming joy."

At 82, Frances Cagle is the senior member of the group.