I-Team: Durham blast a rarity when it comes to natural-gas pipeline incidents 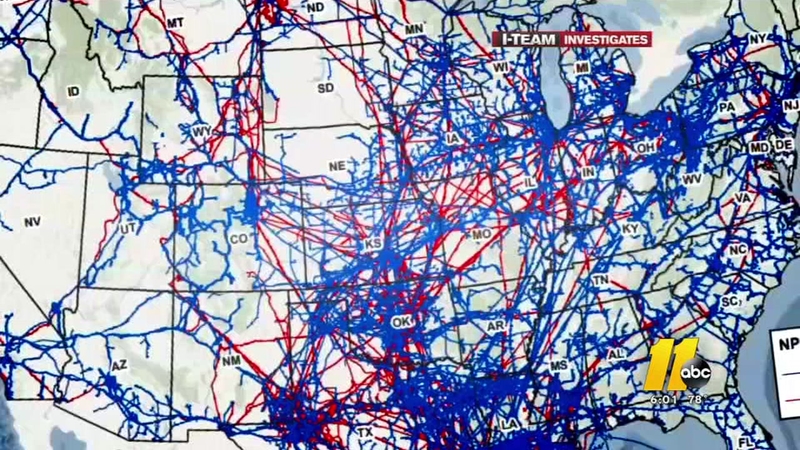 DURHAM, N.C. (WTVD) -- The pipeline explosion in Durham that killed a 61-year-old man was the first such deadly incident in North Carolina in more than 20 years.

In an ABC11 Investigation, the I-Team reviewed all gas pipeline incidents reported to the Department of Transportation since 1999. The single fatality is a remarkable feat considering the 61,000 miles of pipelines delivering natural gas buried underneath the Tar Heel State -- enough to circle the globe. Twice.

"Everything that runs the stuff above ground is underground at some point," Robert Blevins, President and CEO of PSNC's Southeast Energy Group. "There's a tremendous amount of gas, electric, telecom, water, sewer lines that have to be accommodated any time excavation is done.

According to the Pipeline and Hazardous Materials Safety Administration, there are nearly 3 million miles of pipeline transporting natural gas to homes across the United States. The gas is a popular source of energy that heats homes and cooks meals.

Blevins tells the I-Team the pipeline buried under the Studebaker Building was at least two feet underground, made of plastic and relatively new, meaning it was not as susceptible to corrosion.

"It's a reasonable assumption that the line was cut," added.

Data obtained by the I-Team counts 5,705 pipeline incidents in the U.S. since 1999, killing 291 people and injuring 1,267. The incidents, which include leaks, fires and explosions, caused an estimated $9.1 billion in damage.

So far in 2019, the PHMSA reports 60 incidents nationally -- not including the Durham blast -- injuring 60 people. In North Carolina, the data shows 47 incidents between 1999 and 2018, resulting in only seven injuries and $24 million in damage, with two reported incidents in 2019 before Wednesday's blast.