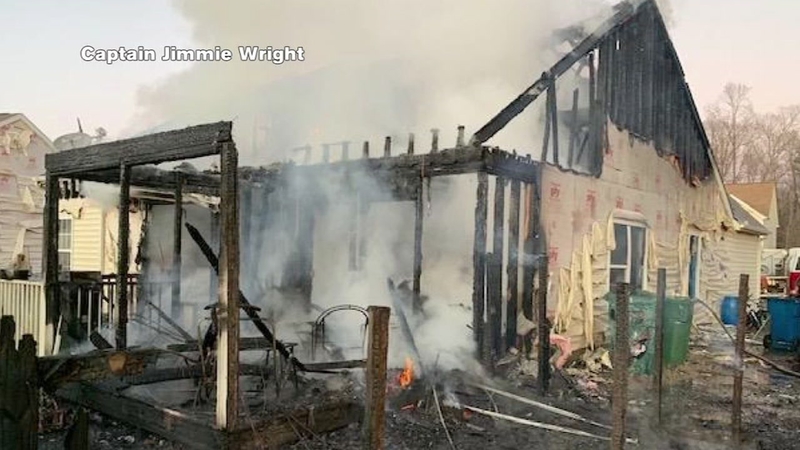 DURHAM, N.C. (WTVD) -- A Durham family is without a place to live on Christmas after a fire tore through their house on Christmas Eve.

Durham Fire Department said the fire sparked around 4:45 p.m. at the home on Spring Creek Drive.

"It was nothing. Just ashes, smoke, ashes, fire trucks," said Lynette McLean, after her family of five rushed back home after the alarm company called them about the fire.

She said they were on the way to Great Wolf Lodge, their children's Christmas present, when they learned the news.

Neighbors called to report smoke and fire shooting out of the home.

One of the family's dogs died in the fire.

When the McLeans returned to further survey the damage Tuesday morning, they found that five of their other dogs were stolen. They told ABC 11 that a neighbor's home that was also affected by the fire also was looted.

"It hurts. It hurts a lot. Because we are at our lowest right now, and people are still trying to take advantage of the little stuff that we do have left," McLean said.

On Tuesday afternoon, friends and family gathered to remove remaining valuables from the property, including their children's bicycles and lawn equipment.

"Christmas to me now means more love and understanding. And it's more about the meaning, it's not about the material things anymore," McLean said.

The Red Cross provided immediate assistance to the family, and they are now staying with relatives nearby. McLean said they've lived there for 11 years, and hope to stay in the area.

"Tragic. Tragic. I really feel for the family because it being around the holiday season no one wants to have an incident of this major proportion happen in their home," neighbor Jay Melton said. "With them having their three children it could be a traumatic thing to try to explain to them exactly what was going on and what happened to their home. So just, count your blessing because this could happen to anybody."

Fire investigators have not said what caused the fire.