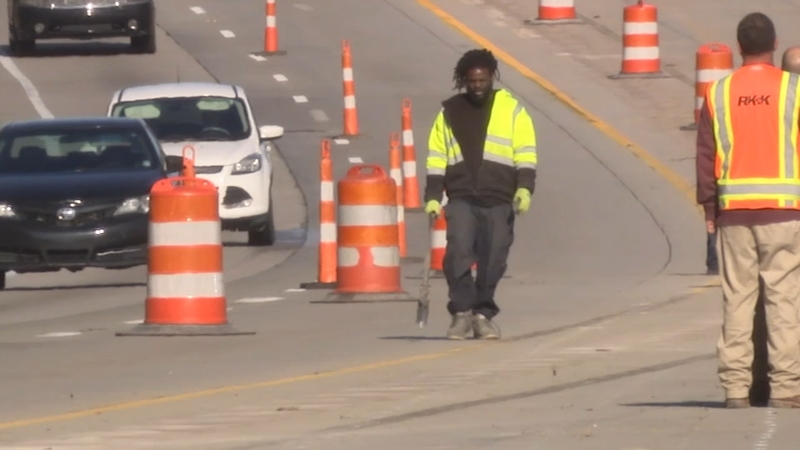 DURHAM, N.C. (WTVD) -- People who commute on the Durham Freeway know how crowded it gets during rush hours.

On Sunday morning, traffic flowed steadily through the work zone of the freeway toward Research Triangle Park, between Briggs Avenue and Ellis Road.

Bright orange barrels separated the cars and trucks from workers, busy making adjustments to markings on the pavement

Octaviea Gerby said for the two and a half years she's lived in Durham, driving of the freeway's been hectic.

"A little hectic. It's not wide enough for the cars that go across it. I'm always worried that we're gonna hit the cars next to us. There's been a lot of construction, and I don't know when it's gonna finish. Hopefully soon," she said.

A first time driver on the freeway, Jacqueline Clyse, agreed. After pulling off the highway for a fill up before heading home to Pennsylvania, she called the work zone "a little tight."

The NCDOT contractors removed markers and striping on the road through that stretch in preparation for a lane shift. The NCDOT calls the work weather dependent, but by Monday there should be new markings and a shift of traffic two lanes to the left heading south on the freeway between Briggs and Ellis.

"Let's hope so! I have become a queen of back roads," said Gerby, "So that I can avoid that road at all costs. Especially during rush hour!"

"Oh, that would be good. That would help," said Clyse,

While she'll be back home in Pennsylvania when the Monday commute begins, those who travel the freeway to and from work or on errands should be aware of the lane shifts and stripe adjustments while driving through that work zone.