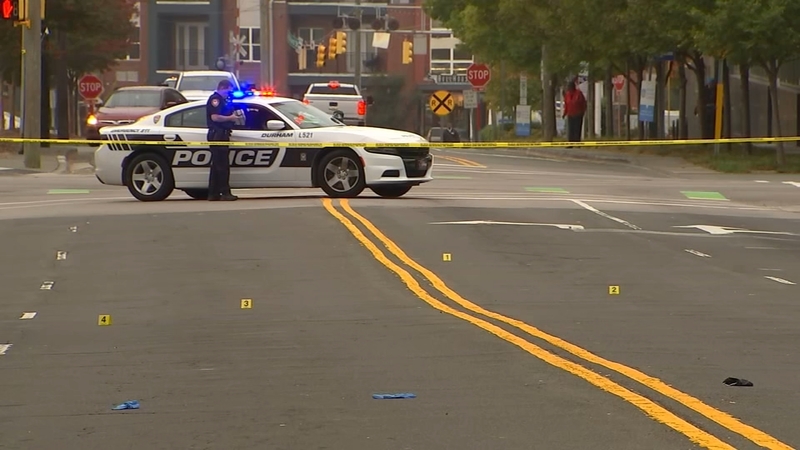 DURHAM, N.C. (WTVD) -- Five people were shot and one person was killed in a pair of drive-by shootings six minutes apart in Durham on Monday night.

Three people were shot at a bus stop near the intersection of Dillard Street and Liberty Street around 10:30. Someone in a dark-colored sedan shot at them while driving down the road, according to Durham police.

Another man was shot in the left shoulder and a woman had a bullet graze her hip. They were both treated at the hospital. The woman was released.

Earlier around 10:23, Two men were walking down the 1200 block of Wabash Street when someone in a dark-colored sedan began shooting at them. One man was shot in the hand and one was shot in the leg. Both went to the hospital in a private car. Their injuries aren't life-threatening.

Update from @DurhamPoliceNC re: car at scene of second drive by shooting overnight: The driver stopped to help one of the shooting victims, and it’s not involved in the search for the shooters who killed a man, hurt 4 other people. @ABC11_WTVD pic.twitter.com/NjcJ6UonmZ

The scene near the intersection of Liberty and Dillard was still active Tuesday morning. A sedan was seen parked on the sidewalk. Police say that sedan was not directly involved in the shooting; in fact, the person driving it got out and tried to help the victims.

Police are still investigating if the shootings are connected. They hope to speak with witnesses and gather more information about what happened.