Deputies use Taser on student at Durham's Northern High School 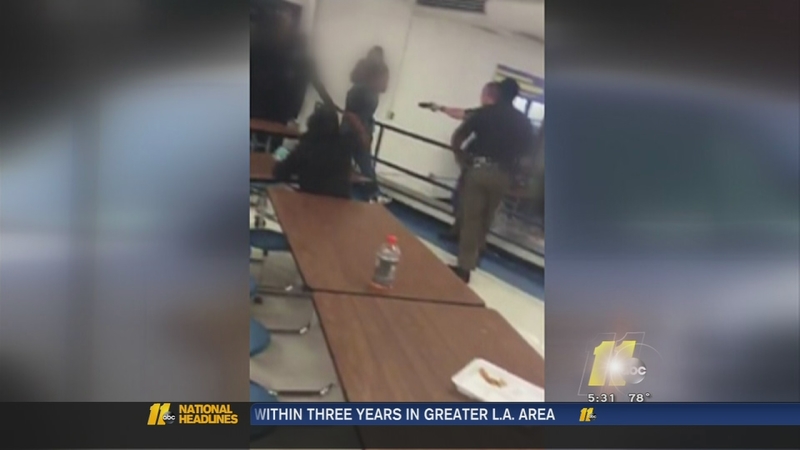 Deputies use Taser on student at Northern High School

DURHAM (WTVD) -- School resource officers used a Taser on a student at Northern High School in Durham Monday in a cafeteria full of students who recorded the incident with cell phone cameras.

According to the Durham County Sheriff's Office, the student was asked to leave the campus after he was suspended.

According to a statement, deputies tried to convince him to leave, but he refused. A touch on the shoulder, according to the sheriff's office, set him off and fists went flying, hitting a deputy in the head.

When physical restraint didn't work, the deputies used a Taser.

The use of Tasers by law enforcement has sparked much debate by groups concerned about Taser-related deaths nationwide. The ACLU of North Carolina gave ABC11 this statement Thursday:

"The misuse of a Taser can cause sudden cardiac arrest and even death. Those risks are often elevated when they are used against vulnerable populations like young people. Law enforcement agencies must ensure that they use these potentially lethal weapons as responsibly as possible and only when absolutely necessary."

CLICK HERE FOR AN ACLU REPORT ON TASER USE (.pdf)

In this case, the student is said to be okay.

In a statement, Durham County Sheriff Michael Andrews said "The men and women of this agency work daily to develop positive changes in the community. This individual's apparent lack of judgement created a situation where the Deputies were forced to take action. The Deputies used the appropriate level of force to deflate a very volatile situation."

"Pursuant to the most up to date policy, procedures and training involving law enforcement use of force, tasers are viewed by most police management as a much preferable method of compliance as compared to hands on compliance techniques. While the use of tasers can look unsettling, the standard law enforcement use of force continuum places taser use as a much safer and effective method of suspect compliance and control generally than when officers are forced into a hands on confrontation where a situation can rapidly escalate into a much more dangerous situation for suspects, officers an bystanders."