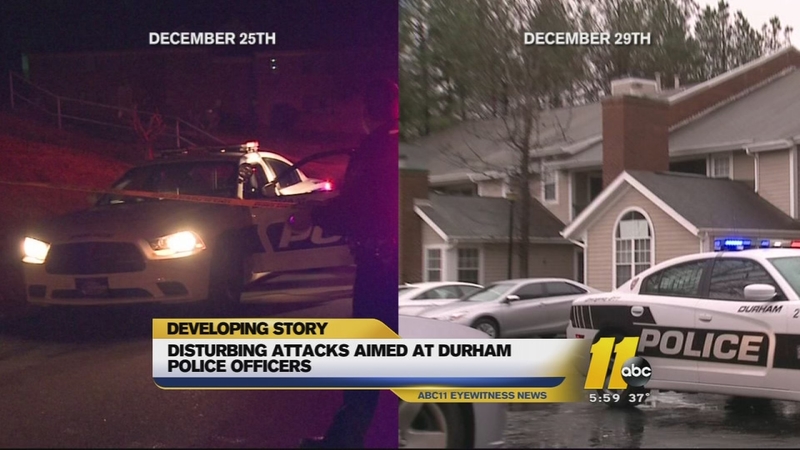 DURHAM (WTVD) -- The Durham Police Department is renewing its public plea for help finding the gunmen behind two recent shootings where its officers were potential targets.

"I can't say with any certainty that they were targeted for being a police officer," said Deputy Chief Larry Smith at a news conference Tuesday, emphasizing his growing concern for his officers amid recent anti-police sentiment.

"My hope is that many would see police officers for who they are -- caring human beings with human failings and shortcomings -- who have chosen a profession of service that has cast them into very difficult circumstances that most people will never understand," Smith added, calling the recent officer-involved shootings disturbing.

An unidentified person fired a shot into an off-duty Durham police officer's apartment Monday afternoon. Authorities say the officer was inside of his home in the Atrium Apartments on Meriwether Drive when a shot shattered the outer pane of his dining room's sliding glass door. It happened just before 2 p.m.

It's the second recent incident involving the Durham Police Department. On Christmas, an officer was sitting in his car writing a report in the Lakeland Street and Truman Street area around 10 p.m. when two men came up behind the vehicle. When the officer got out to speak to them, one of the men pulled out a pistol and started shooting. One bullet hit the officer's car, but he was not wounded.

Investigators are following up on several leads in connection with that shooting incident. In addition to helpful information that could lead to an arrest, Smith is urging to public to show their support.

"I hope that coming into the New Year that people realize these officers are human beings and there are so many positive things they do in this community," said Lopez. "I'm in the process of scheduling meetings with some community groups so that we can have a conversation about what's going instead of yelling about it."