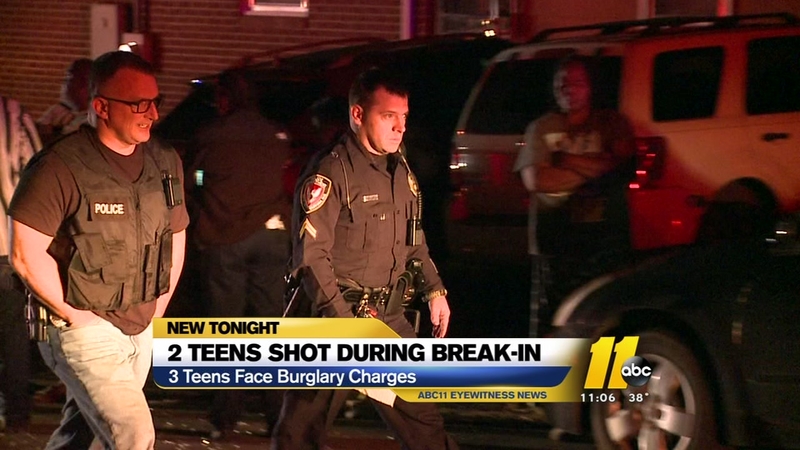 DURHAM, North Carolina (WTVD) -- The Durham Police Department says two teen robbers were shot Thursday night during a home invasion in the 2200 block of Dallas Street.
It happened around 7:15 p.m.

Police said a homeowner told them someone tried to kick in his front door and then reached through a broken window to open the door, so he opened fire.

Both suspects were taken to the hospital with serious injuries.

A second female suspect, 17-year-old Alexis Shaw, was arrested and charged with first-degree burglary. She was also arrested on prior warrants charging her with burglary, conspiracy, and felony larceny in connection with a Nov. 10 burglary near Nichols Farm Drive. She was placed in Durham County Jail under a $510,000 bond.

First-degree burglary charges are pending against the two teen suspects who were shot.

ABC11 has decided to slowly reduce the number of stories on the website that have a comments section. We believe very strongly that our audience should have an opportunity to discuss and debate events in our world, however, we have not been able to moderate the comments as well as we would like. Instead of hosting a platform that could allow a few loud and ugly voices to dominate a conversation, we want to encourage everyone to join us on our social media platforms and speak out there. Facebook: facebook.com/ABC11 Twitter: twitter.com/ABC11_WTVD
Report a correction or typo
Related topics:
durhamdurham countydurham policedouble shootingdurham county news
Copyright © 2021 WTVD-TV. All Rights Reserved.
TOP STORIES
Billy Graham's grandson out of hospital after battle with COVID-19
Senate reveals details of nearly $1T bipartisan infrastructure bill
LATEST: 92 of NC's 100 counties at high COVID transmission
4-year-old among 3 hurt in Granville Co. road rage shooting: Deputies
Florida breaks record for COVID-19 hospitalizations
Chill with pups and grab a drink at this downtown Raleigh bar
Show More
DaBaby dropped from Lolla lineup due to recent homophobic comments
MTV marks 40 years with new 'Moon Person' design
Man dies after being shot along Rock Quarry Road in Raleigh: Police
'Innocent' Wake Forest woman shot, killed in Wilmington, police say
Dueling petitions fuel mask debate in Wake County schools
More TOP STORIES News