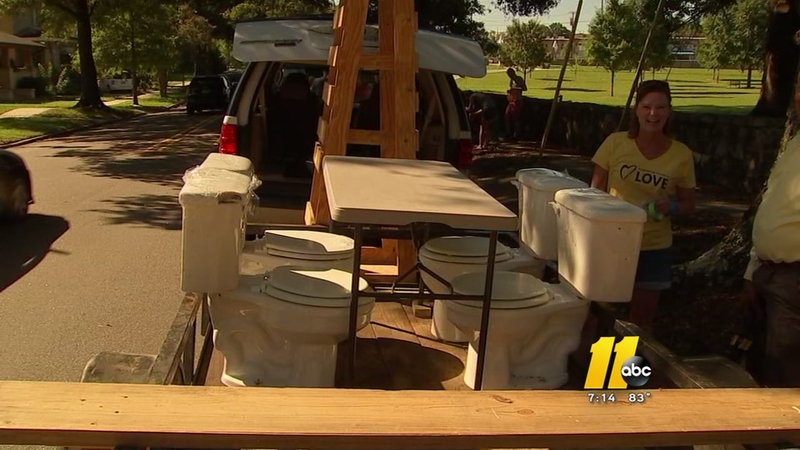 DURHAM (WTVD) -- Durham's annual Pride Parade always draws big crowds to the streets around the Duke campus. Most, like Justin Natvig, support the festive celebration of and by the LGBTQ community.

"It's great to be in an environment where like-minded people can share the same values," said Natvig, who also supports the Crepe Myrtle Festival in Wake County.

During the event, a group of men with signs referencing the Bible and some supporters of the parade got into a debate across the street from the Duke campus.

"The word of God commends you to eternal fire," thundered one critic, who heard this response: "God loves everyone!"

There were also parade participants who criticized HB2 its supporters, including the Republican-led legislature and Gov. Pat McCrory.

One group created a float with several commodes arranged around a table for a mock meal. They told us it's for Governor McCrory and legislative leaders.

"They'll be dining on crow, Jim Crow," said Susan Stancill of the Unitarian Universalists of North Carolina. "Serving as their beverages, all Koch products. K-O-C-H products. As a North Carolinian, I'm ashamed of what our legislature has done, and the games that they're playing with people's lives and identities."

Natvig also criticized the bill that has some companies and entertainers refusing to do business in North Carolina because, they say, HB2 allows discrimination against transgender people.

"I am friends with a lot of trans folks, and I think that these people are simply trying to live their lives and HB2 is making it even more difficult for them to do so," he said.