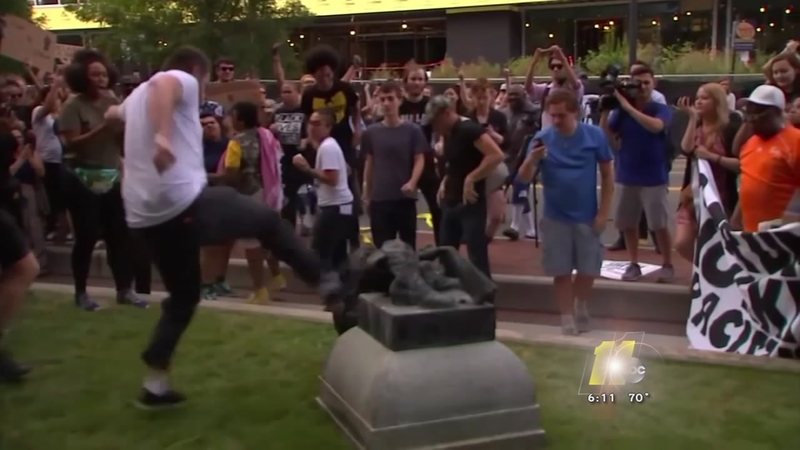 The trio's arrests bring the number to 11 people charged with the crime.

RELATED: Durham protesters pull down Confederate statue outside courthouse
"For me as a resident of Durham it's more than about just a hunk of metal, Wideman stated. "It's about white supremacy, gentrification, and police brutality."

A few county commissioners have reportedly come forward asking the district attorney's office for leniency with the protesters. Among them James Hill, Heidi Carter, and Commission Chairwoman Wendy Jacobs.

In a statement posted on her Facebook page, Jacobs says:

"Those who chose to pull down the monument should be held accountable for their actions but the charges should be fair and take into consideration the overall circumstances and intent of their actions."

But Major Paul Martin with the Durham Sheriff's Office says these leaders should not be sharing their personal views because it causes interference in applying the law.

"Anarchists are using the volatile issue of race to accomplish destruction and spread hatred. Is this what our political leadership desires? Is this leadership?"

"The fact they are making a statement, and at the same time, they control our raises, our budget, even the sheriff's raises. I am concerned about the political interference. I am concerned that everybody should be treated equally under the law. Just because you agree with someone's underlying political leanings doesn't mean you should try to obtain favors for them."

ABC11 reached out to commissioners for comment about Martin's statements.

Jacobs responded and said she had no further comment.

Carter said she disagreed with the deputy.

"In the current social and political context, I would urge that law enforcement and the justice system not prioritize pursuing the highest possible charges linked to a felony," Carter said. "Rather, I hope that the legal process will unfold with leniency for those who were taking a stand through civil disobedience."

The three individuals who were in court Tuesday will return to court next month and October.

They are out on bond.