NC Board of Elections holds emergency meeting on Durham vote 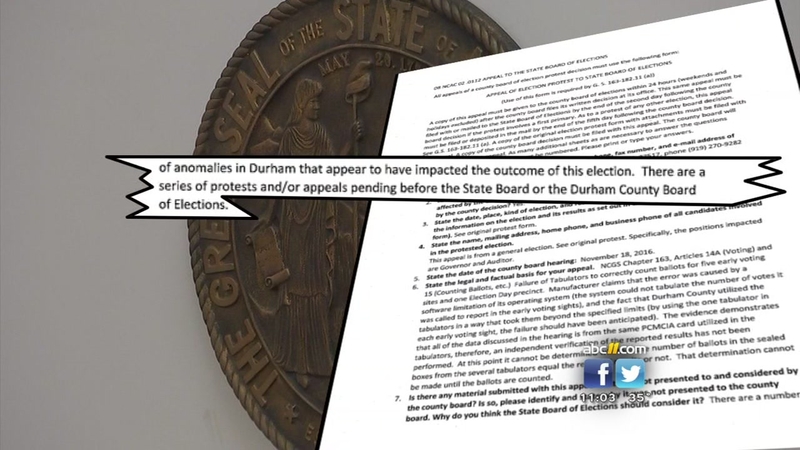 DURHAM (WTVD) -- The North Carolina State Board of Elections held an emergency meeting Sunday by phone afternoon to consider a formal request by the Republican Party to hold a vote recount in Durham County.

It decided to hold a hearing on the issue later this week.

Gov. Pat McCrory's campaign announced Saturday that GOP lawyer Thomas Stark asked the State Board of Elections to require a recount because of questions about 90,000 or so Durham County ballots. His appeal says there are questions about how those ballots were tallied because of a computer problem at several voting sites.

Durham County's Republican-controlled local elections board already rejected a protest over those ballots.

Stark also asks the state to consider issues related to provisional ballots and people who voted through same-day registration in the heavily Democratic county.

The McCrory campaign says if Durham County has a recount and its results are the same, the campaign will be prepared to drop its statewide recount request.

Campaign manager Russell Peck says in a news release that a Durham recount would allow everyone to "move towards a conclusion of this process."

Democrat Roy Cooper leads McCrory by about 7,700 votes, according to unofficial statewide results. About 20 counties have yet to finish counting votes.