2 suspected in string of Triangle robberies 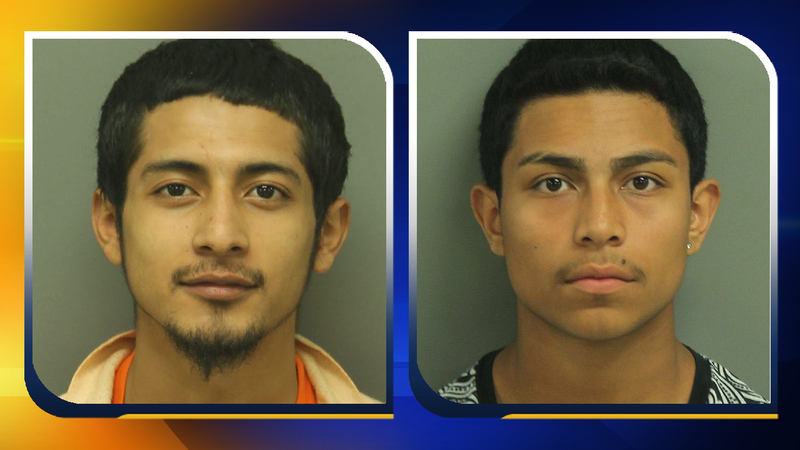 GARNER, NC (WTVD) -- The Garner Police Department says it has arrested a 21-year-old in an October 7 carjacking and is looking for a 16-year-old suspect.

Junior Fidel Ramos-Leiva of Zebulon is in the Wake County jail. Detectives have warrants for Antonio Navarro-Saldivar of Raleigh.

The pair are charged with robbery with a dangerous weapon and felony larceny for allegedly stealing a 2012 Nissan Maxima from a person in the White Oak neighborhood.

"He came around the corner with a revolver and said, 'Give me everything you have right now or I'm gonna shoot you right here.' So, at that point, I just start, I started to scream and he said, 'Stop screaming. Stop screaming or I will shoot you," the victim told ABC11 Tuesday.

Other law enforcement agencies are looking at the pair as possible suspects in other robberies around the Triangle including Wake County and Durham.
Garner police said it was important to end the crime spree.

"They have a gun. They have the means to kill somebody and we just need to get them off the street. Those kinds of people need to be locked up," said Lt. Joe Binns with the Garner Police Department.

"These two guys were out just creating a situation that could be disastrous. This lady got home from work that day and they took her car at gunpoint," Binns continued. "She did a great thing. She gave up her car keys, gave up her purse, because those things can be replaced. She can't."

The Wake County Sheriff's Office has charged Ramos-Leiva in an Oct. 7 robbery.

The Raleigh Police Department suspects them in two robberies. Ramos-Leiva is charged in incidents in late September and October 23.

Durham police are looking at the pair as possible suspects in a string of four incidents on Oct. 7 which include a holdup at the Tobacco Plus Mini Mart at 2017 Chapel Hill Road.

Anyone with information about the Garner case or the whereabouts of Navarro-Saldivar is asked to contact the Garner Police Department at (919) 772.8810 or e-mail us at GPDtips@garnernc.gov.