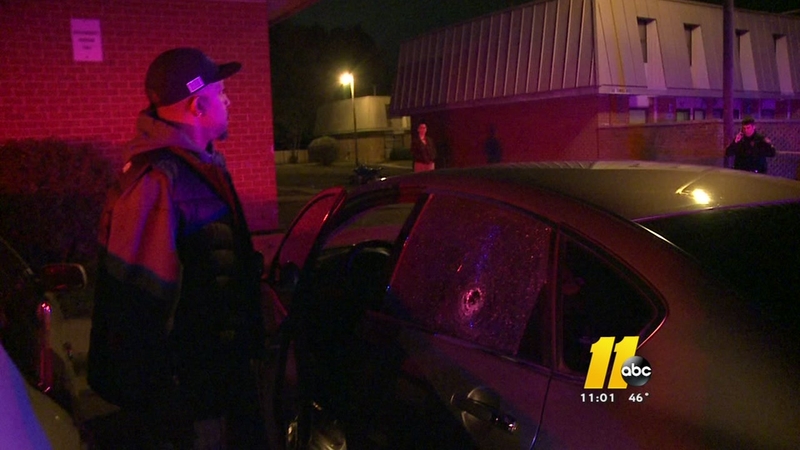 It happened shortly before 6:45 p.m., Durham Police said. A group of men approached the victim and began to shoot, striking him in the midsection and the arm.

It happened in the 1100 block of S. Hoover Street.

Witnesses at the scene told an ABC11 crew that people ran for cover when the bullets started flying.

Bullet holes could be seen in parked cars.

The victim was a man in his 20s, police said. He was taken to a hospital with what appeared to be non-life-threatening injuries.

No suspects are in custody, but police said they may have fled in a gray SUV

ABC11 has decided to slowly reduce the number of stories on the website that have a comments section. We believe very strongly that our audience should have an opportunity to discuss and debate events in our world, however, we have not been able to moderate the comments as well as we would like. Instead of hosting a platform that could allow a few loud and ugly voices to dominate a conversation, we want to encourage everyone to join us on our social media platforms and speak out there. Facebook: facebook.com/ABC11 Twitter: twitter.com/ABC11_WTVD
Report a correction or typo
Related topics:
durhamdurham countydurham policegun violenceman shot
Copyright © 2022 WTVD-TV. All Rights Reserved.
TOP STORIES
Wake County Sheriff Baker going into runoff election
NC Primary Election: Live updating results
Madison Cawthorn concedes primary to Chuck Edwards
Budd, Beasley win to set up Senate showdown in November
Fayetteville woman found murdered was pregnant, family members say
Will property taxes rise? Raleigh council discusses $1.14B budget
Wounded U.S. veteran receives mortgage-free home
Show More
NY teen found dead in SC after 13 years; Sex offender charged
Voting goes 'smoothly' across NC on primary election day
Durham voters turnout on Primary Election day
Former UNC player Ademola Okulaja dies at 46
Congress dives into UFOs, but no signs of extraterrestrials
More TOP STORIES News