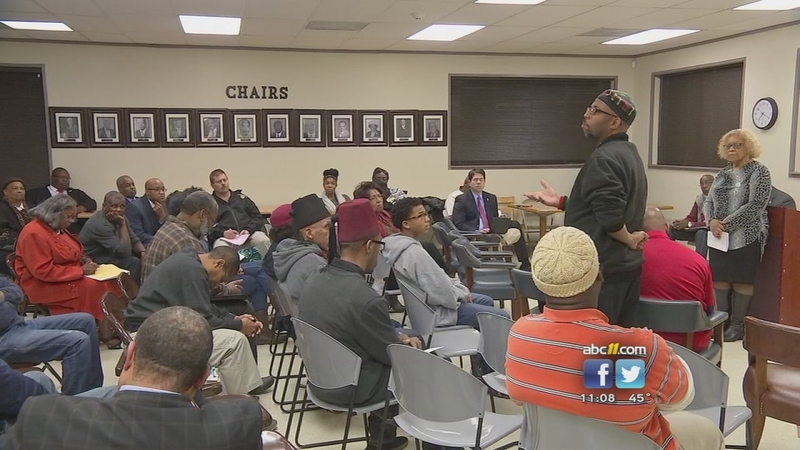 DURHAM, NC (WTVD) -- The Durham Committee on the Affairs of Black People (DCABP) and Durham's Interdenominational Ministerial Alliance (IMA) heard ideas from citizens on how to reduce violent crime in the city during a joint community listening session Tuesday evening.

One of the attendees at Tuesday's meeting was Durham activist minister Paul Scott who has called for a vigilante group to take on violence on the streets.

Other speakers at the meeting said too many Durham residents have come to just accept the violence. Some tugged residents to hold themselves accountable as a community from children to parents and schools to police.

And when asked if it would be just another "feel good meeting", organizers insisted the goal is a strategic long-term plan.

"Proof is in the pudding. I mean we're talking about a strategic plan, and I think it's a good idea, and once they develop it, we'll see where it goes from here," offered Durham Mayor Bill Bell.

We also asked Mayor Bell about Scott's proposal to organize community patrols. Some in the audience took offense to the term 'vigilante' group.

"When I say vigilante, I'm talking about being vigilant in the community. I believe in books instead of bullets," said Scott.

When asked to clarify if he is talking about an organized group of citizens who are taking it upon themselves to protect the streets, "By any means necessary," Scott responded.

Organizers pledge to keep the dialogue going and another listening session is planned for the first week of January, but no firm date yet.

The ultimate goal is a long-term plan for reducing violence in Durham.