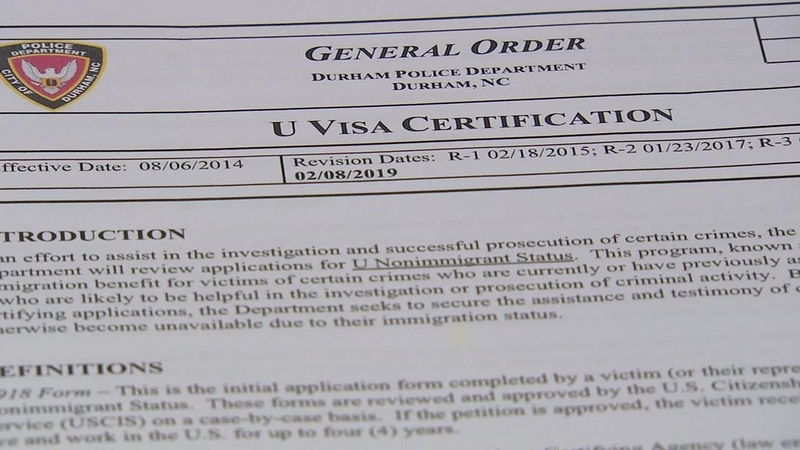 "I was held hostage for almost three hours," she said on Tuesday through an interpreter. "Every time I talk about this, it's just like there's a big pain on my chest that I cannot get rid of."

She said that night, which was more than nine years ago, two men barged into her East Durham apartment and pointed a gun at her head, all while her two children and three-day-old baby watched.

"I did talk to the investigators. Nobody is in custody but I did my part," she said.

O'Campo said she helped the authorities as much as possible but she is not eligible for the U-Visa program, because the crime happened more than six years ago.

Durham Mayor Steve Schewel is pushing to expand the U-Visa program, which he brought up during Monday night's State of the City Address that O'Campo attended with local immigration advocates.

He's hoping it will fight crime and make Triangle neighborhoods safer. He said the Durham Police Department has certified more U-Visa applications than ever before in 2018 and he wants that number to grow.

U-visas are given to undocumented immigrants who are victims of crime and who help police track down criminals.

O'Campo was hopeful the mayor would open up that time period of eligibility.

"The crime has not stopped," said Ivan Almonte, a community activist. "A lot of Latinos are the target for these crimes. Let's talk locally about what we can do for immigrants. If we want to really support them, let's be as progressive as we say we are."

Her firm, Bull City Lawyer, has formed U-Visa working groups with victims. She said in previous Durham Police Department administrations, U-Visa certifications were not being granted by law enforcement, even for those eligible.

Al-Zoubi said criminals target those in the immigrant community because there's a huge fear of being deported just for calling the authorities.