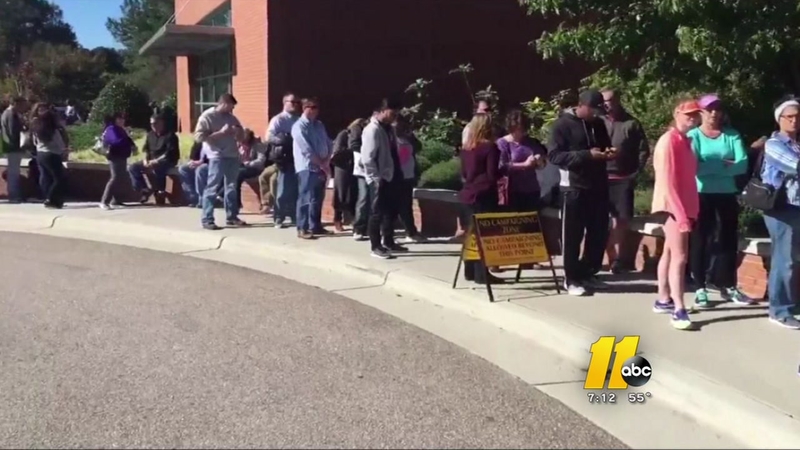 DURHAM (WTVD) -- Hundreds of early voters sang spirituals during a short march from a Main Street church to the Durham County Board of Elections downtown offices. Many carried signs urging others to vote early.

They joined Helen Hilderman, 93, and her niece Jennifer Sosensky in an already long line to the polling stations inside.

Hilderman told ABC11 she cast her first vote for Franklin Roosevelt in 1936. Her reply when asked what she'd tell people still sitting at home:

"Oh, come out and vote! Don't miss it!"
Those who wait much longer could face extra-long lines on Election Day.

Many people who lined up in Durham for their opportunity to beat the late day rush appreciate the early voting option.

Clinton voter Rosa Anderson said this to us:

"As a mother with two young black males, I expect Hillary to respect their rights, and be there to develop policy and procedure that would give them the opportunity to live in these United States of America as proud black men," explained Anderson. "That's why I'm voting for Hillary Clinton!"

Among the early voters are people who vote Republican, and for the man who's at the top of the ticket.

People like Peter Schenck, a proud Trump voter, told ABC11: "I think the stronger the vote is, he better he'll do!"

In some places around the Triangle, such as Apex, people have waited half an hour or longer.

"Totally worth it," said early voter Hunter Sabol. "When it's longer it gets a little more frustrating 'cause you're out in the cold."

Brenda Newkirk, another early voter, cites several reasons for you to get it done now: "It's out of the way, you can sit back, you can enjoy and then you can get other people to go out, to early vote."