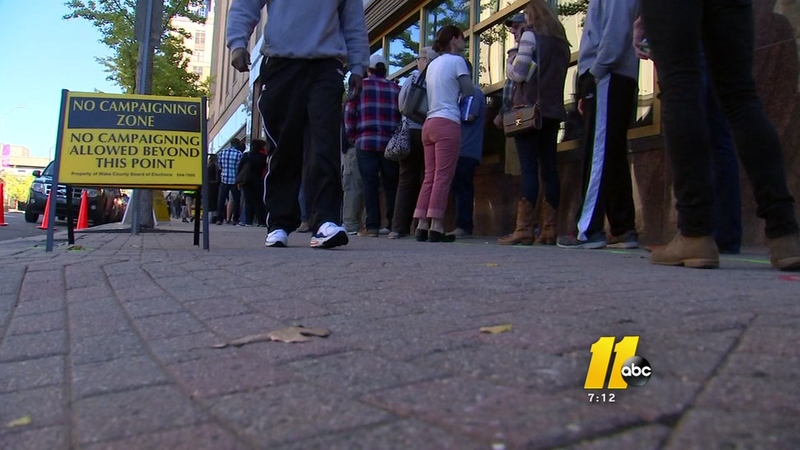 RALEIGH (WTVD) -- Officials said that as of Saturday afternoon, over 3 million people in North Carolina had voted in the 2016 general election -- 44 percent of the state's registered voters.

That's a 13.4 percent increase over the entire 2012 early voting period.

"We are proud of the highest early voting turnout in the state's history," said Kim Westbrook Strach, executive director of the State Board of Elections. "Statewide, North Carolina had more early voting hours and more sites than ever before."

A long line snaked across Chavis Park in Raleigh, up some concrete stairs, and well up the block. Voters chatted with others waiting to cast ballots, worked their cellular phones, and read as the line inched forward.
"I'm a student at NC State, so I didn't really have time," Nicholas Errico said, explaining why he waited until the last day of early voting.

"I was working, and my work came first."

While many patiently awaited the opportunity to cast ballots in Raleigh, Cassandra Creekman planned to return. She came to the Chavis Park polling place with two young children and had to turn around.

"I can't stand in this line with a 3-year-old! So I guess we'll have to try without the kids on Tuesday."

Cassandra Creekman told us she has flexible job hours, so she can arrange for child care while she returns to her Wake County precinct.

"So I can come on Tuesday, even if it takes a little while. But I know a lot of people aren't in that situation. And between child care and work it might be difficult for people to actually get in and vote."

Hillary Clinton and Donald Trump are on a campaign binge through battleground states where the leads have been see-sawing.

Clinton is drawing on her reserves to fan out across the map; Bernie Sanders rallying in Iowa, Vice President Joe Biden in Wisconsin, and President Obama in North Carolina.

Republican presidential nominee Trump held a rally in Wilmington on Saturday afternoon. Former Texas Gov. Rick Perry also will be traveling the state for him.


RELATED: Nearly 40 percent of Americans report tension with family or friends over election

ABC11 is your Election Headquarters. Click here for all 2016 Election stories.