After a wild week, ECU gets its football coach -- and an AD 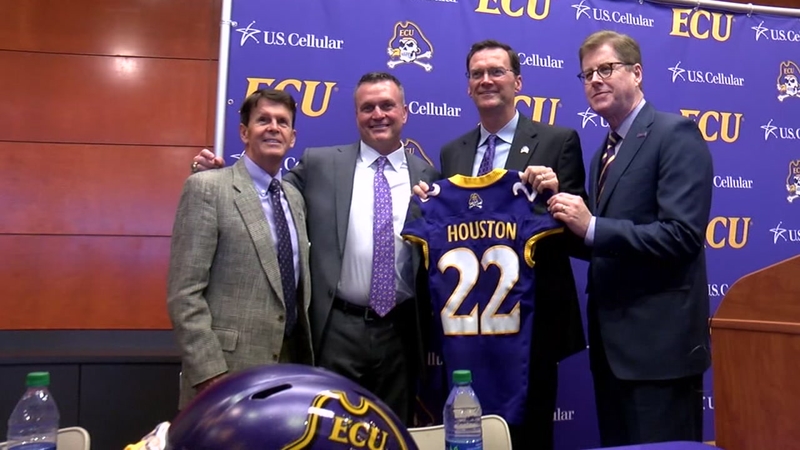 GREENVILLE, N.C. -- East Carolina has hired Mike Houston as its next football coach and Jon Gilbert as its athletic director.

Both Houston and Gilbert received five-year contracts, the school announced, though financial terms were not disclosed. Gilbert started his new job immediately and was to be introduced at a news conference later Monday, with Houston's introduction coming Tuesday.

Houston led James Madison to a 37-6 record, the 2016 national title in the Football Championship Subdivision and an appearance in the championship game in 2017. The Dukes lost to Colgate on Saturday in the second round of the FCS playoffs.

"During the search process, Jon stood out as a great fit for the proud traditions we have at ECU and for the vision we have for this program,'' Staton said.

The part where new ECU Pirates FB coach Mike Houston fired across the bow of the other football programs in North Carolina pic.twitter.com/truVxhxMdF

Houston has strong ties to North Carolina. He played at Mars Hill in the early 1990s and coached at two high schools in the state before spending three seasons at Lenoir-Rhyne. He led that school to the Division II championship game in 2013 before taking over at The Citadel. He replaces Scottie Montgomery, who was fired last week during the Pirates' third straight 3-9 season.

Houston's hiring caps a bizarre seven-day stretch both at James Madison and at two schools in North Carolina. It initially looked like Houston was headed to Charlotte. He publicly acknowledged last Wednesday that Charlotte had offered him the job to replace the fired Brad Lambert. The next day -- just 48 hours before kickoff of ECU's season finale at North Carolina State -- the Pirates abruptly fired Montgomery.

Charlotte athletic director Mike Hill then issued a statement Friday saying the school was withdrawing its offer to Houston. The Dukes lost to Colgate on Saturday while the Pirates were routed 58-3 by the Wolfpack under interim coach David Blackwell.

James Madison then announced Sunday that Houston was leaving for a head-coaching position at an unnamed FBS school.

Although it wasn't official on Sunday, Charlotte was out and ECU was Houston's destination.

"We are grateful to Mike Houston, his family and his staff for their commitment to JMU over the last three years," director of athletics Jeff Bourne said Sunday in a statement. "When we hired Mike, he was the right coach at the right time for our program. He injected energy, he went about his job the right way, he cared about our student-athletes and he won.

"I am confident that we will have a new coach in place shortly who will build upon that foundation and carry us to even greater success."

"I could not be more grateful for the opportunity to be part of what I believe is a perfect college environment found at JMU," Houston said Sunday in a statement. "There's only one JMU. This is a special place and a place that will be hard to ever replicate in future coaching opportunities. I will always have incredible memories of my time here."

"Mike made it perfectly clear to me this is the job he covets and he fully understands the tradition and prestige of Pirate football,'' Gilbert said. "He is a man of high integrity, a great communicator and believes in molding student-athletes on and off the field. He's going to be a great asset to our university and the Greenville community.''

Montgomery went just 9-26 with a 4-20 record in American Athletic Conference play, and 17 of those 26 losses were by at least 20 points. He lost six of his final seven games. It's the least successful three-year period for the school since it won just eight games from 2003-05 under John Thompson and Skip Holtz.

Gilbert, who had been at Southern Miss since January 2017, has also worked at Alabama and Tennessee -- where he was an executive senior associate athletic director under Hart, whose three-month contract extension was to expire Dec. 15. At the time of Montgomery's dismissal, the school said its athletic director search was "ongoing in earnest'' and that person would "finalize the hire'' of Montgomery's replacement.