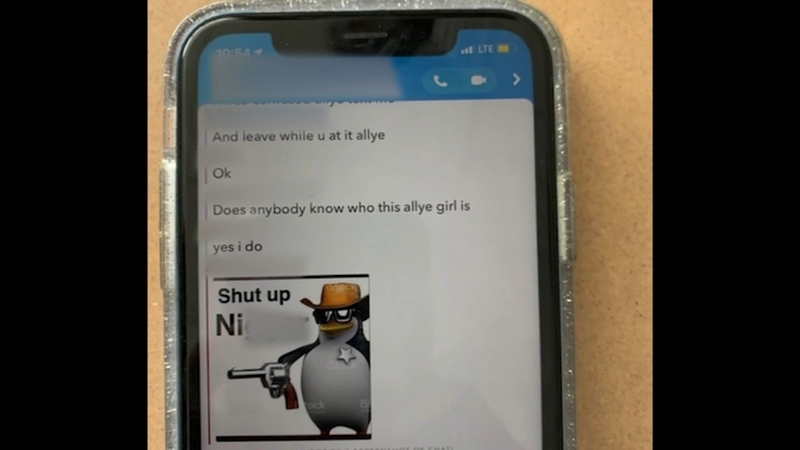 WENDELL, N.C. (WTVD) -- It's Cenayia Edwards' first year at East Wake High School and this is not the way the 14-year old imagined she'd start the school year. Faced with vile racism in a group chat among classmates, she decided to face it head-on; determined to fight hate with heart.

So when the teen's English teacher assigned everyone in the class to write a speech, Cenayia wrote her own version of 'I Have a Dream', still feeling the emotional trauma of the text messages she saw from her classmates a few days before.

It started when one of Cenayia's white friends at the Wendell school told her a group of students had created a group chat, and the thread had taken an ugly, racist turn.

When 14-year old Cannaya found out about the racist group chat some of her Wake County classmates were using, she infiltrated it, then she exposed it. Now, her parents want make sure she’s safe at school. #abc11 pic.twitter.com/Oe76F1DHgK

Cenayia changed her avatar to a white face. When she was allowed access to the group chat, she says she was horrified. The chat was full of messages like "Pullin triggers and shootin n------,"and "Kill n----- babies."

One person wrote, "#bring slavery back." Another person debated whether their screen name should be "Black slayer."

And when Cenayia called out her classmates for the racist talk, one person replied with a cartoon meme of a penguin with a gun along with the words, "Shut up n-----."

"It's very scary," said Cenayia's mother, Cecelia Pope Edwards, who serves as an Army recruiter, often working at East Wake High. She said she first feared for her daughter's safety. "It made me feel uncomfortable because I'm not sure what my daughter's up against. Because we're getting text messages from (Cenayia) being upset while she should be studying in her Honors English class about kids laughing because they think using these words or saying that they're 'gonna kill black kids' and 'if it ain't white it ain't right'; 'if it ain't white, burn it.'"

Cenayia added, "It made me feel very offended. And to find out who the person was that the group chat I was really shocked."

Corderro Edwards, Cenayia's father, says he and his wife reached out to the school's principal last week. "We were supposed to hear something back by Tuesday this week," Edwards said.

When mom and dad didn't hear back from East Wake administrators about their concerns we reached out to the school district.

"The principal is still investigating," a WCPSS spokesperson told ABC 11 in a statement. "It appears that most of the students are from Johnston County, which means the investigation is more complex."

"We have to be really vigilant about incidents that happen like this," Pittman said. "They should really take this seriously because if this happened among one popular group in school, imagine what's going on in the rest of the high school"

In the meantime, Cenayia is determined to speak about what happened.

"I'm going to allow my daughter to be heard. My daughter's not going be quiet," Edwards said.

Mom and dad say East Wake's principal did reach out to them today -- but said there wasn't much the school could do because any threats weren't specific or imminent.